TEHRAN, September 24 - Iran’s Islamic Revolution Guards Corps (IRGC) says the terrorists behind a bloody attack in the southwestern city of Ahvaz will definitely face "deadly and unforgettable" revenge in the near future. 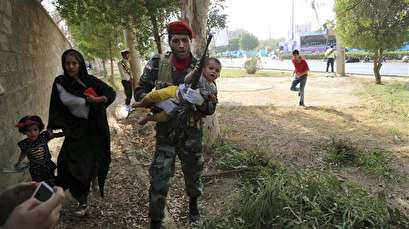 TEHRAN, Young Journalists Club (YJC) - In a statement on Sunday, the IRGC expressed its sympathy with the bereaved families of the victims of the terrorist attack on a military parade in Ahvaz on Saturday, which killed at least 25 people and injured more than 60 others.

It added that the terrorist crime committed in Ahvaz by the ruthless stooges of the global arrogance and reactionary regimes in the region revealed that the sworn enemies of Iran spare no effort and conspiracy to transfer insecurity into the country after their failure to achieve their ominous goals.

They are even ready to target innocent people, including women and children, with "blind terrorist measures," the IRGC's statement read.

It emphasized that such crimes would fail to undermine the firm determination of the Islamic establishment and the Iranian nation to remain committed to the Islamic Revolution's sublime ideals.

The IRGC said it would spare no effort to hunt for the perpetrators of terrorist measures in the region and beyond and bring them to justice.

Leader of the Islamic Revolution Ayatollah Seyyed Ali Khamenei said on Saturday the terrorist attack in Ahvaz was the continuation of plots hatched by US stooges in the region to create insecurity in the country, adding that Iran’s intelligence services must swiftly find the accomplices of the "criminals” behind the attack and put them on trial.

The Leader said the "tragic and sorrowful" incident in Ahvaz and the killing of people by mercenary terrorists once again exposed the cruelty of the enemies of the Iranian nation.

Iranian President Hassan Rouhani also said on Saturday that the Islamic Republic would give a "crushing" response to the slightest threat against the country.

"Those who are providing these terrorists with propaganda and intelligence support must be held accountable," Rouhani said.

He added that the mercenary terrorists carried out the blind attack in Ahvaz and killed innocent people in an effort to make up for repeated failure of their masters in Iraq, Syria and other countries.

Alavi said the terrorist attack, which was backed by foreign powers and their regional puppets in order to create insecurity in Iran, would bear no fruit and would fail to undermine the Iranian nation's power and coherence.

The al-Ahwaziya terror group, whose recruits are believed to be scattered in several European countries, including in the Netherlands and Denmark, claimed responsibility for the attack.

The terror outfit, which is backed by Saudi Arabia, has a record of carrying out acts of sabotage in Iran’s Khuzestan Province, which encompasses Ahvaz and some other dominantly Arab cities.