Iran holds funerals for victims of terror attack in Ahvaz

TEHRAN, September 24 - Iran held funerals Monday for the victims of the weekend terror attack on a military parade in the southwestern city of Ahvaz, the deadliest attack in the country in nearly a decade. 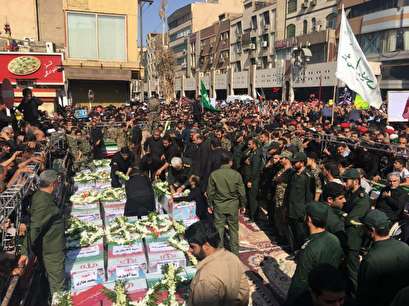 Others, mainly young people wearing ethnic clothes of the region's Arab minority, held large photographs of those slain at Saturday's parade in Ahvaz, the Khuzestan provincial capital, where terrorists disguised as soldiers had opened fire at marching troops and onlookers. Of the 25 people killed, 12 were from Ahvaz and the rest from elsewhere in Khuzestan.

The procession walked down the Naderi and Zand Streets, many weeping and beating their chests, a traditional way of showing grief. Mourners played drums, cymbals and horns, according to local Arabic custom.

Speaking at the funeral ceremony, Revolutionary Guard's acting commander Gen. Hossein Salami vowed revenge against the attack's perpetrators and what he called the "triangle" of Saudi Arabia, Israel and the United States.