TEHRAN, September 24 - Leader of the Islamic Revolution Ayatollah Seyyed Ali Khamenei says Iran will severely punish those “cowardly” elements who were behind a recent terrorist attack in the southwestern Iranian city of Ahvaz. 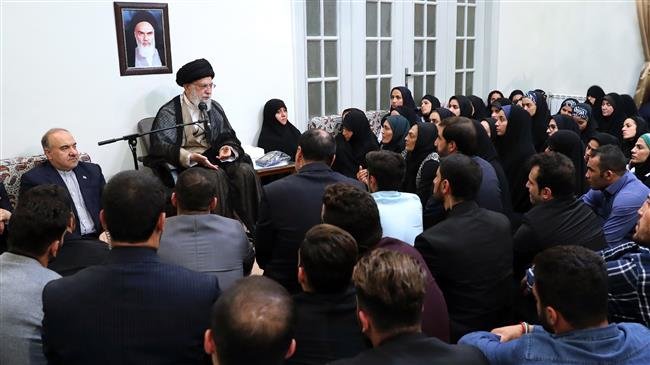 TEHRAN, Young Journalists Club (YJC) -Ayatollah Khamenei made the remarks in a meeting in Tehran on Monday with a group of athletes and medal winners of the 2018 Asian Games in Jakarta, Indonesia.

Terrorists on Saturday opened fire at a crowd of people during a military parade in Ahvaz, killing 25 military personnel and civilians — including women and children — and wounding at least 68 others.

Masses of Iranian people and government officials on Monday participated in a funeral procession for the victims of the terrorist attack in Ahvaz.

Ayatollah Khamenei said the bitter incident “once again showed that the Iranian nation is faced with many enemies on its honorable path to progress and excellence.”

Describing the attack on defenseless people as an act of cowardice, the Leader noted, “According to [available] reports, this cowardly act has been perpetrated by the same people who are saved by Americans whenever they face a difficult situation in Iraq and Syria” and whose operations are being financed by Saudi Arabia and the United Arab Emirates.

Elsewhere in his remarks, Ayatollah Khamenei noted that every medal won by Iranian sportsmen and sportswomen makes freedom-seeking nations of the world happy while vexing the arrogant front.

“The arrogant [powers] are angered by victory of the Iranian nation in any field. Therefore, your victory is indeed a victory for the [Iranian] nation and a defeat for the extended front of Iran's enemies,” the Leader added.

Ayatollah Khamenei noted that although Iran's enemies always try to hide the great achievements of the Iranian nation, the honors won by Iranian athletes in front of millions of people cannot be denied.

“The Islamic Republic of Iran will not take part in sports competitions against representatives of the usurper [Zionist] regime,” the Leader emphasized.