Labour to allow second Brexit referendum, but only on final deal

TEHRAN, September 24 - The UK Labour Party says it will only endorse the idea of a second referendum on Brexit if it is on the final deal and not whether Britain should leave or remain in the European Union. 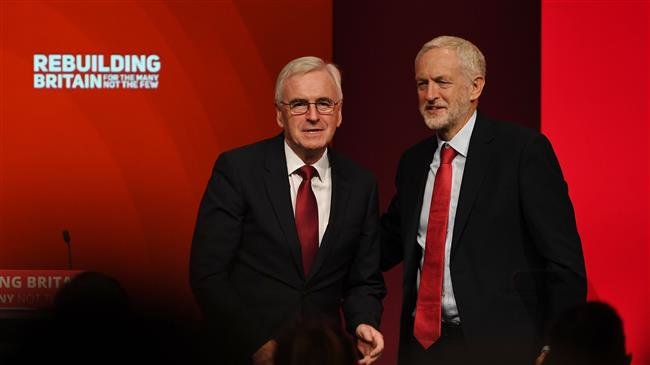 TEHRAN, Young Journalists Club (YJC) -Labour finance spokesman John McDonnell told Sky News on Monday that if there was to be a People’s Vote on Britain’s withdrawal from the EU, the party would want it to be focused on the final outcome of the Brexit talks with the EU.

He said the reason for the preference was that the Labour’s policy was to respect the outcome of the 2016 referendum in which Britons voted for their country to leave the EU.

However, the senior politician who is viewed as second in command in the Labour, reiterated the party’s previous position that it was better for the British voters to go into an early general election rather than an exclusive referendum on Brexit if Prime Minister Theresa May failed to conclude her talks with the EU.

“If we can’t get a general election, we’ve kept the option of People’s Vote on the table and that’s what we’ll go for, but I’d much prefer a general election,” said McDonnell, adding, “We believe general election is the best solution because people can then have a wide-ranging debate and also then choose the team that would then do the negotiations.”

Labour leader Jeremy Corbyn said Sunday that the party would definitely vote down a Brexit deal by May if it does not meet its tests. Corbyn, himself opposed to the idea of a second referendum on Brexit, also said in an interview with the BBC that he was open to the possibility of a second vote if Labour members agreed to it.

The Labour is holding its annual party conference in Liverpool, in northwestern England. Party members are discussing a range of issues, including Brexit, the nationalization of public services if Labour forms a government and a restructuring of the tax system so that the party could better reach out to its traditional base of support.

Calls for a second Brexit referendum intensified last week when May faced renewed pressure from the EU to revise her Brexit strategy, known as Chequers since it was announced in her country residence in July.

'May would revise Brexit plan'

The British premier faces increasing pressure both from the opposition and from senior members of her own Conservative Party over her controversial Brexit plan.

Jacob Rees-Mogg, a senior pro-Brexit Tory lawmaker, said Monday that he was sure May would change her mind on Chequers now that it was opposed both by European politicians and large parts of the British public.

“The prime minister is a lady of singular wisdom and therefore is likely to recognize the reality that Chequers does not have much support either in this country or abroad,” said Rees-Mogg.

However, officials in May’s cabinet said the prime minister was still determined to go along with her Brexit plan.

A government spokesman said that May’s senior ministerial team remained fully behind her Brexit proposals despite the criticism shown in the recent EU summit in Austria.

“The cabinet gave its full support to the white paper (her proposals), and that continues to be the case,” said the spokesman on Monday.