TEHRAN, September 24 -Israeli soldiers have shot dead a Palestinian and wounded some 50 others who had held a protesting rally along the northern coast of the besieged Gaza Strip in a bid to break the decade-long blockade on the impoverished sliver. 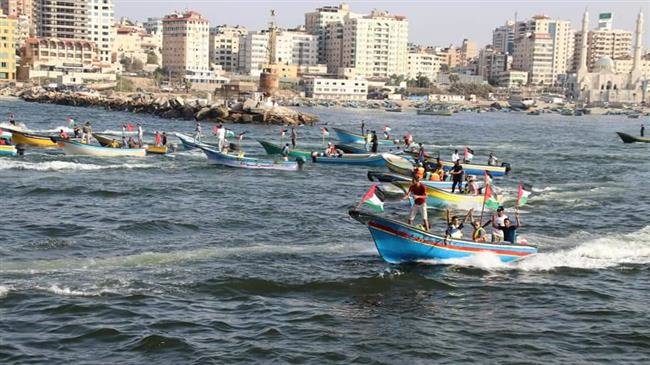 TEHRAN, Young Journalists Club (YJC) -According to a brief statement by Gaza Health Ministry, the protester, whose identity has not been disclosed yet, lost his life after Israeli troops began shooting live rounds and tear gas canisters at crowds of Gazans, who had held a rally against the prolonged siege along the coast of al-Wahe district in the northwestern borders of the enclave.

Hundreds of Gazan demonstrators had gathered in the area on Monday afternoon to participate in a boat protest setting off from the Gaza seaport against the siege, but Israeli navy obstructed the protest’s way off the shore by shooting at them.

The International Committee for Breaking the Siege, which organized the march, called upon the “free world must move to save the Gaza Strip”, whose fishermen are under crippling fishing limits.

Since inhabitants of Gaza began staging weekly border protest rallies on March 30, the Israeli regime’s forces have killed more than 180 people and wounded thousands of others.

Last month, The Palestinian Union of Agricultural Work Committees (UAWC) recently announced in a report that Israeli attacks against Palestinian fishermen in the Gaza Strip prevent “fishermen from practicing their fishing work and accessing their livelihood resources.”

Israel imposed a limit of three nautical miles on fishing in the waters off the Gaza shore until August 2014, when Palestinian fishermen were allowed to go out six miles.

Back in July, however, Israel reduced the fishing area to only three nautical miles as part of punitive measures against Gazans over the launch of incendiary balloons from the Palestinian coastal sliver into the occupied territories as part of ongoing protests against the decades-long Israeli occupation.

According to the Oslo Accords, the fishing zone is supposed to extend to 20 nautical miles, but it has shrunk over the years as the Tel Aviv regime has imposed greater restrictions.

Over the past few years, Israeli troops have carried out over a hundred assaults on Palestinian boats, arresting dozens of fishermen and confiscating several boats.

The occupying regime has imposed movement restrictions on the Gaza Strip since the early 1990s. Restrictions intensified in June 2007 when Israel imposed a land, sea and air blockade on Gaza, citing security concerns.

Some two million Palestinians in Gaza remain locked in and are prevented from having free access to the remainder of Palestine and the outside world. The blockade has also undermined the living conditions in the coastal enclave and fragmented its economic and social fabric.

Furthermore, the isolation of Gaza has been exacerbated by restrictions imposed by the Egyptian authorities on Rafah, its single passenger crossing.

Many attempts have been made throughout the past several years to draw the public attention to the ongoing siege of Gaza. From 2008 through 2016, international activists have sailed 31 ships and boats to challenge the Israeli naval blockade.

Back in late May 2010, an Israeli raid on the Gaza Freedom Flotilla, comprising six civilian ships, killed 10 Turkish activists in high seas and sent the Ankara-Tel Aviv ties into a tailspin.

Israel’s military raid against the civilian flotilla was met with global condemnation. The United Nations Security Council called for a prompt investigation into the incident and the United Nations Human Rights Council described the attack as “outrageous.”