TEHRAN, September 25 - Turkish military vehicles have entered Idlib after militants snubbed an agreement between Turkey and Russia for the creation of a buffer zone in the northwestern Syrian province, the last major militant stronghold in the Arab country. 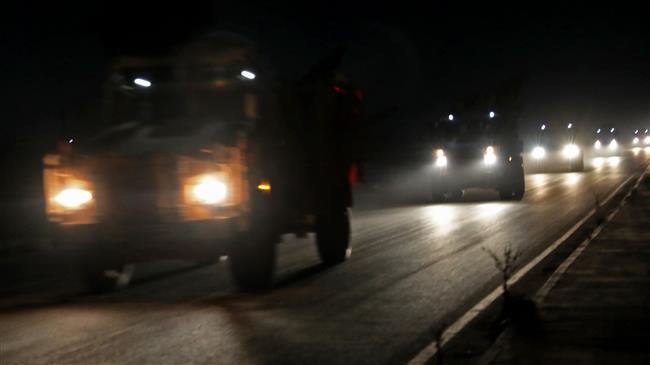 The agreement over the buffer zone was reached during a meeting between Turkish President Recep Tayyib Erdogan and his Russian counterpart Vladimir Putin in the Black Sea resort of Sochi.

Under the deal, a demilitarized zone of 15-20 kilometers will have to be created in Idlib along the contact line between the militants and Syrian government troops by October 15.

The deal also involves the withdrawal of “radically-minded” militants, including the al-Qaeda-linked ones, from the region.

Erdogan said both Turkey and Russia would carry out coordinated military patrols on the borders of the buffer zone in a bid to detect and prevent “provocation by third parties and violations of the agreement.”

On Sunday, however, Turkish-backed militants rejected to either lay down their arms or surrender the territory under their control.

“We will not abandon our weapons, our land or our revolution” against Syrian government forces, said the so-called National Liberation Front (NLF).

Turkey, along with Iran and Russia, has been serving as a mediator in talks between the Syrian government and the opposition since 2017, negotiating on the militants’ side.

Idlib is considered to be the last theater of war in Syria. Government troops have liberating the militant-held provinces one by one with the help of Syria's allies Iran and Russia.

The Russo-Turkish agreement has suspended a concerted Syrian army operation against the militants in the province.