TEHRAN, September 25 - Iranian President Hassan Rouhani underlined the importance of bilateral relations between Tehran and Kabul and said closer relationship in all areas will benefit both countries. 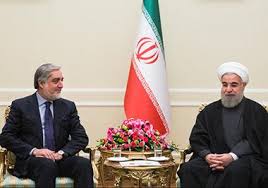 TEHRAN, Young Journalists Club (YJC) - Speaking at a meeting with Chief Executive of Afghanistan Abdullah Abdullah in New York on Monday evening, Rouhani stressed the need for Tehran and Kabul to boost cooperation in securing the common borders and encouraging the private sectors to expand trade relations.

“Security of regional countries, including Iran and Afghanistan, is interrelated and the presence of foreigners in this region is detrimental to all of us,” he said.

Rouhani also pointed to the importance of the campaign against illicit drugs and said, “Illicit drugs are a threat to our and your people and all nations of the world and should be fought through cooperation because they destroy the future of nations.”

“A major part of fund for financing terrorism comes from illicit drug trafficking,” the president added.

Abdullah, for his part, praised Tehran’s support for Kabul and said Iran has always stood by Afghanistan in difficult times and has never given up its relations with the country under the influence of any third country.

Heading a high-ranking delegation, Rouhani arrived in New York on Sunday evening to participate in the annual meeting of the United Nations General Assembly.

Speaking to reporters at John F. Kennedy International Airport upon his arrival, Rouhani said he will have sideline meetings and interviews during the trip.

Citing the “different atmosphere” of this year’s General Assembly meeting, the president said, “Americans have unfortunately reneged on many of their commitments across the world, including their commitments under the JCPOA (the 2015 Iran nuclear deal).”

The president also said that the UNGA provides an opportunity for a better explication of the US breach of international regulations.

On May 8, US President Donald Trump pulled his country out of the Joint Comprehensive Plan of Action (JCPOA), which was achieved in Vienna in 2015 after years of negotiations among Iran and the Group 5+1 (Russia, China, the US, Britain, France and Germany).