TEHRAN, September 25 -The Committee to Support Palestinian Journalists says the Israeli military’s violations against Palestinian journalists since the beginning of the current year stands at 637 as the Tel Aviv regime continues its repressive measures against members of the press in the occupied territories. 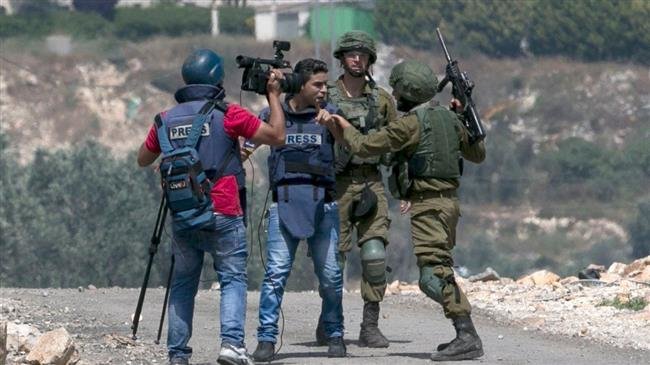 The committee further noted that the month of August witnessed the highest number of Israeli violations against Palestinian journalists, and the number hit 129.

It added that most of last month’s violations were recovered in the Gaza Strip, where reporters were targeted by live bullets and tear gas canisters as they were reporting on “The Great March of Return” protests.

The committee stated that it has recorded 82 cases of arrests and summonses since the beginning of the current year, besides 53 cases of extension of detention, adjournment and trial of Palestinian journalists being held in Israeli jails.

It highlighted that it has documented more than 83 cases of denial of coverage and obstruction of information, 31 cases of confiscation of media equipment, cameras and press cards plus six travel ban cases.

The committee also recorded 7 cases of incitement, and 35 cases of closure of media institutions and news websites.

It later expressed deep regret and condemnation of the Israeli forces' targeting of Palestinian reporters, who conduct their “noble” mission by conveying the truth and exposing the ugliness of crimes being committed against the Palestinian nation.

Israeli authorities have on occasions accused al-Quds television channel of being a “propaganda tool” for the Islamic resistance movement, Hamas.

The committee finally warned against the rising number of Israeli crimes against Palestinian journalists, calling on the International Federation of Journalists and the Union of Arab Journalists in addition to all human rights organizations to voice solidarity with Palestinian journalists, condemn Israel’s barbaric practices against members of the press and devise measures to stop the deliberate Israeli violations against them.