TEHRAN, September 27 - Speaking in a meeting with the Prime Minister of Malaysia Mahathir Bin Mohamad on Wednesday in New York on the sideline of the UN General Assembly session, Rouhani hailed the steps taken to cement relations between the two countries in different fields such as energy, joint ventures, and scientific cooperation. 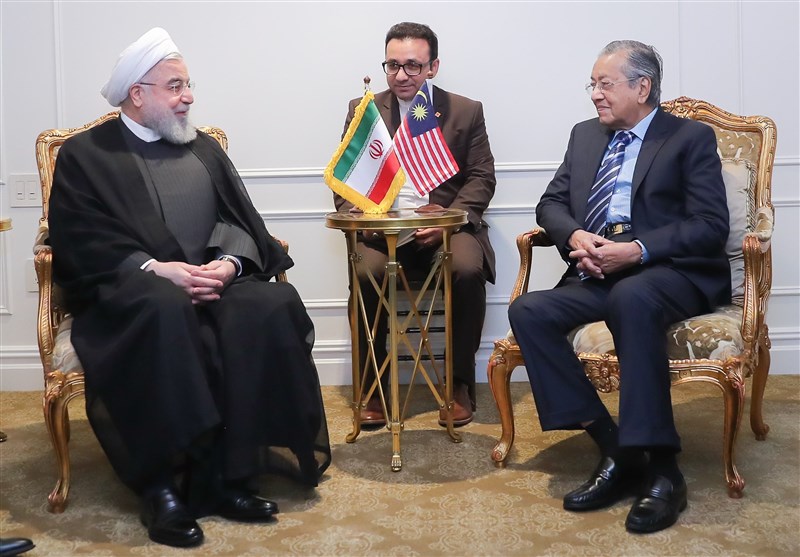 TEHRAN, Young Journalists Club (YJC) - “We should work to further deepen these relations in other fields, such as trade and economy, communications, railways and ports, agriculture and industry,” he said.

He described Iranians living in Malaysia a great asset to develop relations between the two countries.

Referring to the illegal withdrawal of the United States from the Joint Comprehensive Plan of Action (JCPOA) and the imposition of cruel sanctions against the Iranian nation, the president pointed out, “In such a situation, friendly countries are duty-bound to stand up to the unilateralism of the US to dismantle these sanctions."

“Iran welcomes the presence of Malaysian companies to participate and invest in their projects,” continued Rouhani, adding, “The will and seriousness of high ranking Iranian and Malaysian authorities for the full development of relations and cooperation are among the most valuable assets in the relations between the two countries”.

He also went on to say, “The two countries can increase interaction and consultation on various regional and international issues to have more effective role in these fields”.

"Today, in many Islamic countries, including Palestine and Yemen, we are witnessing great problems and disasters against human beings," the president said, referring to the need for all countries to cooperate and engage seriously in the fight against terrorism and extremism in the world, especially in the World of Islam.

Malaysia's Prime Minister Mahathir Mohammad also referred to the positive and growing ties and cooperation between the two countries in different sectors, emphasizing efforts to develop and strengthen relations between them, especially in the field of trade and investment.

The Malaysian Prime Minister described US sanctions against the Iranian nation illegal and added, "We need to pursue strategies for deepening bilateral relations so that sanctions are ineffective by developing more cooperation and interaction".

"We must not allow conflicts in Muslim countries to spread extremism and violence against Muslims," he said.