TEHRAN, September 26 - Turkish President Tayyip Erdogan said a Turkish court, not politicians, will decide the fate of an American pastor whose detention on terrorism charges has roiled relations between Ankara and Washington. 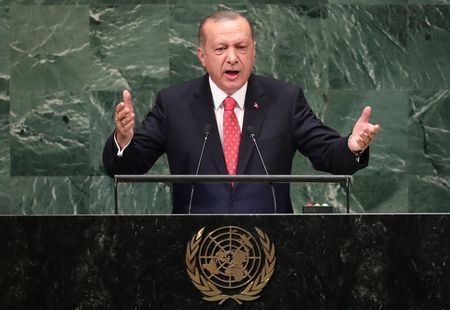 TEHRAN, Young Journalists Club (YJC) - U.S. Secretary of State Mike Pompeo said on Monday he was hopeful Turkey would release evangelical pastor Andrew Brunson this month. He was moved to house arrest in July after being detained for 21 months.

In an interview on Tuesday while he was in New York for the annual United Nations General Assembly meetings, Erdogan said any decision on Brunson would be made by the court.

"This is a judiciary matter. Brunson has been detained on terrorism charges ... On Oct 12 there will be another hearing and we don't know what the court will decide and politicians will have no say on the verdict," Erdogan said.

If found guilty, Brunson could be jailed for up to 35 years. He denies the charges.

"As the president, I don't have the right to order his release. Our judiciary is independent. Let's wait and see what the court will decide," Erdogan said.

"The Brunson case is not even closely related to Turkey's economy. The current economic challenges have been exaggerated more than necessary and Turkey will overcome these challenges with its own resources," Erdogan said.

Erdogan said the decision was a clear sign of the central bank's independence, adding that as president he was against increasing rates.

He also said Turkey will continue to purchase Iranian natural gas, despite U.S. sanctions on Tehran.

Erdogan said it was impossible for Syrian peace efforts to continue with Syrian President Bashar al-Assad in power, adding that the withdrawal of "radical groups" had already started from a new demilitarized zone in Syria's Idlib region.