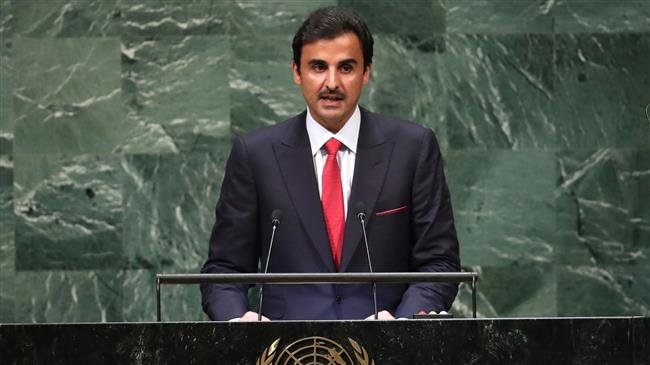 TEHRAN, Young Journalists Club (YJC) - Addressing world leaders at the 73rd session of the United Nations General Assembly in New York on Tuesday, Sheikh Tamim said the blockade is "paralyzing" Arab nations and has only caused "our region to remain hostage to marginal differences."

He pointed out that Doha remains open to "unconditional dialogue."

"We hope that we will all transform the council's current plight into an opportunity to reforming it," Sheikh Tamim said.

PressTV-Saudi Arabia mulling over new canal to isolate Qatar
Saudi Arabia is seriously considering digging a 60-kilometre canal that will turn Qatar into an island.
Qatar's Foreign Ministry later announced that the decision to cut diplomatic ties was unjustified and based on false claims and assumptions.

The document containing the demands by Saudi Arabia, Egypt, the UAE and Bahrain also asked Qatar to sever all ties with the Muslim Brotherhood and the Lebanese Hezbollah resistance movement. Qatar rejected the demands as "unreasonable."