TEHRAN, September 26 - China and the United States can compete but should not view each other with a Cold War mentality and should avoid falling into a zero-sum game trap, the Chinese government's top diplomat said, amid deteriorating ties between the superpowers. 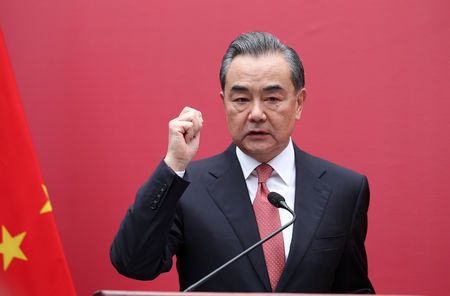 TEHRAN, Young Journalists Club (YJC) - Beijing and Washington are locked in an increasingly bitter trade war and are increasingly at odds over other issues, such as U.S. support for self-ruled Taiwan which China claims, and U.S. sanctions on China's military for buying Russian weapons.

At a meeting with former U.S. Secretary of State Henry Kissinger on Tuesday in New York on the sidelines of a United Nations meeting, Chinese State Councillor Wang Yi said that the two countries would only lose if they confronted each other.

"China and the United States can have competition, but should not use a Cold War mentality to view each other, and nor should they slip into the trap of a zero-sum game," a Foreign Ministry statement on Wednesday quoted Wang as saying.

If that continues, it will lead relations down the wrong path, which is not in the interest of either country or the international community, he said.

China hopes the United States meets it halfway so they can have a "correct perception" of each other, and prevent this negative momentum from spreading to ensure relations don't stray from the correct track, Wang added.

China has been angered this week alone by the imposition of new U.S. tariffs on Chinese imports as well as a planned arms sale to democratic Taiwan, claimed by Beijing as sacred Chinese territory.

In a Wednesday editorial, the state-run China Daily said the Taiwan weapons sale would only worsen already poor ties with China.

"Now that the Trump administration is aggressively seeking to challenge China's interests on both the economic and military fronts, one wonders whether Washington wants to permanently damage Sino-US relations," the official English-language newspaper said.

"And since the Trump administration is trying to jettison all principles that govern bilateral relations in a desperate bid to suit its own purpose, China should not only prepare for the worst but also be ready to appropriately respond to the US' provocations."

U.S. President Donald Trump's top trade official said on Tuesday that changing China's economic policies to become more market-oriented "is not going to be easy" even with tariffs now in place on $250 billion worth of Chinese goods.