TEHRAN, September 26 - Boeing and Leonardo will provide four MH-39s to the Air Force under a $375.6 million contract, the first part of the $2.3 billion UH-1N Replacement Program. 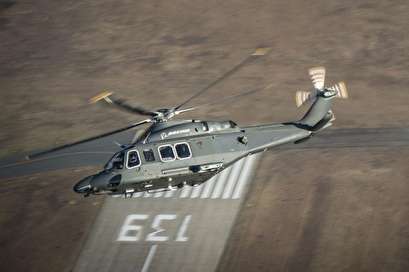 TEHRAN, Young Journalists Club (YJC) -Boeing and Leonardo will provide four MH-39s to the Air Force under a $375.6 million contract, the first part of the $2.3 billion UH-1N Replacement Program.

The contract, awarded to Boeing as primary contractor on Monday by the Department of Defense, will see Leonardo assemble the new MH-39s in Philadelphia and Boeing integrate military-specific equipment at another facility south of Philadelphia.

"We're grateful for the Air Force's confidence in our MH-139 team," David Koopersmith, vice president and general manager for Boeing Vertical Lift, said in a press release. "The MH-139 exceeds mission requirements, it's also ideal for VIP transport, and it offers the Air Force up to $1 billion in acquisition and lifecycle cost savings."

Including options, the contract will have a total value of approximately $2.3 billion, which will provide for the procurement and logistical support of up to 84 MH-139 helicopters, training facilities and support equipment, the Pentagon said.

The UH-1N Iroquois, otherwise known as the Huey, has been in service since the Vietnam War, with the Department of Defense looking at possible replacements for decades.

Aging squadrons of the aircraft are still responsible for security operations around intercontinental ballistic missile fields and evacuating members of Congress in Washington in the event of attack or major disaster.

The MH-139 is a derivative of Leonardo's AW139, which has seen service for over a decade, has more than two million flight hours and has an established supply chain, which Boeing said will help with cost savings on the program.

"We are extremely proud of this outstanding result," Alessandro Profumo, chief executive officer of Leonardo, said in a press release. "Major customers continue to rely on Leonardo to meet the most stringent requirements like the critical mission of protecting missile bases and transporting government personnel and special forces."

The MH-139 has open architecture cockpit systems, can use pintle-mounted machine guns that do not interfere with the helicopter doors and a standardized cabin that offers more room than the Huey.

The rotorcraft can carry up to 15 people and more cargo than the lighter Huey. It also has engines designed to reduce it's infrared signature against detection and IR missiles.

Work will primarily be performed in Ridley Park, Pa., and Philadelphia, Pa., and is expected to be completed by September 2031, if all options are exercised.

Air Force fiscal 2018 research, development, test, and evaluation funds in the amount of $98 million are being obligated at the time of award, the Pentagon said.