After being mocked at UNGA, Trump leads Security Council meeting; Iran on agenda

TEHRAN, September 26 -US President Donald Trump is chairing the UN Security Council meeting on the non-proliferation of weapons of mass destruction, one day after his speech that attacked Iran at the General Assembly but during which he was also mocked for touting his domestic policies. 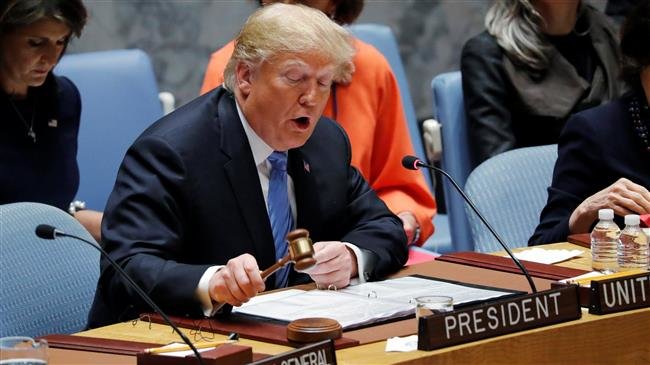 TEHRAN, Young Journalists Club (YJC) -During the Wednesday session of the UNSC, Trump is expected to voice fresh criticism of Iran. The US initially said the council meeting chaired by Trump would focus on Iran, but later broadened the agenda to include nuclear non-proliferation and weapons of mass destruction.

It is Trump’s first experience in leading a session of the UNSC, where the US currently holds the rotating presidency.

In a Twitter post on September 5, Zarif said Trump is seeking to “abuse” the presidency of the Security Council to divert a session, which has been devoted to Palestine for decades in a bid to blame Iran for horrors the United States and its clients have unleashed across the Middle East.

Trump used his address to the 73rd session of the General Assembly on Tuesday to attack Iran, and promised hard-hitting sanctions against Tehran while urging the world to isolate the Islamic Republic.

The US president started his speech by bragging about his domestic accomplishments before addressing his foreign policy priorities. He boasted that his administration had accomplished "more than almost any" other presidents in US history. The remark drew laughter from the audience of world leaders.

He accused the current US administration of violating the rules of international law by withdrawing from the 2015 nuclear deal that Iran signed with six world powers, including the US.

He also emphasized that the US is pushing other countries to violate the Iran deal, known as the Joint Comprehensive Plan of Action (JCPOA), and that it is threatening all countries and international organizations with punishment if they comply with Security Council Resolution 2231, which endorsed the JCPOA.

After announcing Washington’s withdrawal from the JCPOA, Trump re-imposed the anti-Iran sanctions which had been lifted under the accord. The Trump administration has also been seeking to put even more economic pressure on the Islamic Republic by threatening the European firms doing business with Tehran with punitive measures.

Rouhani said in his speech that "unilateral and illegitimate" sanctions imposed by the US against Iran are tantamount to "economic terrorism" and are in violation of world nations’ right to progress.

He further noted that the US policy vis-à-vis the Islamic Republic of Iran has been wrong since the victory of the Islamic Revolution in 1979.