UN must act against deal breaking, lawlessness: Rouhani to Guterres

TEHRAN, September 27 - Iranian President Hassan Rouhani slams the US’s withdrawal from the 2015 multilateral nuclear deal, saying the United Nations should not allow any country to make a habit of breaching international commitments, especially those under Security Council resolutions. 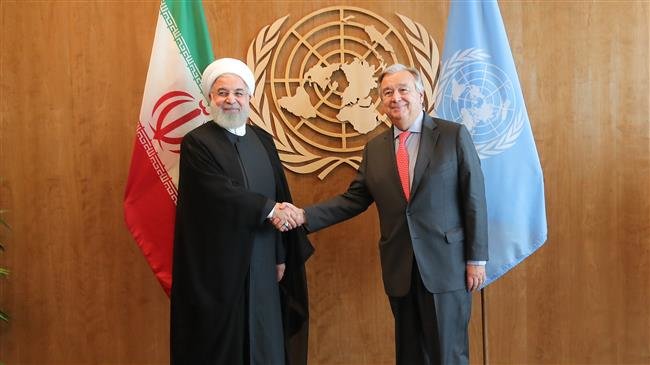 TEHRAN, Young Journalists Club (YJC) - Rouhani made the remarks in a meeting with UN Secretary General Antonio Guterres on Wednesday during his stay in New York for the 73rd session of the UN General Assembly.

“The United Nations should shoulder its responsibility to strengthen the rules of international law so that no country could renege on its international commitments, including Security Council resolutions, at its own desire,” Rouhani said.

He said promise-breaking and lawlessness should not turn into a routine trend in the international community.

“Transparent positions of the UN secretary general will be effective in preserving the JCPOA as a symbol of successful deal making and an outcome of dialog and diplomacy,” he added, using an acronym for the official name of the Iran deal, the Joint Comprehensive Plan of Action.

Iran has so far lived up to its commitments under the JCPOA despite the illegal US exit, said Rouhani, urging the UN to help get its member states to take practical measures to protect the JCPOA besides adopting political positions on the matter.

Back in May, President Donald Trump pulled the US out of the JCPOA despite objections from the other signatories to the accord.

Besides re-imposing the anti-Iran sanctions it had lifted under the accord, the Trump administration has also been seeking to discourage the European firms from doing business with Iran by threatening them with penalties.

Elsewhere in his comments, Rouhani expressed Tehran’s readiness to cooperate with the UN in resolving regional and international issues such as the crises in Yemen and Syria.

“Iran, Turkey and Russia have been able to take good steps in establishing peace and security as well as fighting terrorism in Syria,” the president said.

He also expressed concerns about the humanitarian situation in Yemen, urging the UN to play a more active role in the impoverished country and deliver humanitarian aid to its citizens.

The UN chief, for his part, hailed Iran’s reaction in the face of Washington’s pullout from the nuclear agrrement.

As an international agreement, the JCPOA is endorsed by the United Nations and the Security Council and should be fully implemented, Guterres said.

He added that the UN encourages Europe and Iran’s other partners to stand against unilateral US sanctions, which the UN chief said do not conform to UN rules and could entail “humanitarian and economic consequences.”

The UN secretary general further appreciated Iran’s efforts to resolve the Syria crisis and called for closer cooperation between Tehran and the world body concerning the counter-terrorism fight and aid delivery to crisis-hit people.

In a meeting with the Malaysian premier, Rouhani called for enhanced cooperation among Muslim countries to counter terrorism and extremism, saying this could contribute to global stability and security.

The Malaysian PM, for his part, described US sanctions against the Iranian nation as illegal, saying Tehran and Kuala Lumpur need to deepen bilateral relations to render American bans ineffective.

Additionally, the Iranian president sat down with his Swiss counterpart. During the meeting, Rouhani said the JCPOA should be kept alive as an important international agreement.

Berset, for his part, stressed that the Swiss government has always supported the deal and will make efforts to keep it alive, hailing Iran’s wise response to Washington’s unlawful withdrawal from the agreement.

In a meeting with the Italian premier, Rouhani said that the US pullout from the JCPOA was “an insult to the UN and independence of countries.”

He further expressed his satisfaction with the attempts by the EU and Italy to defend the deal, adding, however, that Europe should take swift practical measures in this regard.

Conte, for his part, voiced Italy’s readiness to enhance its ties with Iran despite the problems that the US has created in the way of implementing the JCPOA.

In a meeting with Maduro, Rouhani said that the Venezuelan and Iranian people have always been hit by US “aggression and sanctions.”

“The Americans invite us to dialog, and at the same time, are seeking to overthrow the Iranian government, thinking that if they put pressure on the people, they can achieve this goal. They don’t, however, know that a government that enjoys people’s support will not surrender to threats,” he said.

“Today, independent countries should develop relations in all fields and resist enemies’ excessive demands and prove that the path they have taken is wrong."

Maduro, for his part, called for resistance against enemies’ efforts to gain dominance over nations by resorting to “terrorism.”