Trump insists world leaders were laughing with him during UN speech

TEHRAN, September 27 - US President Donald Trump has slammed as "fake news" reports that world leaders laughed at him during his latest speech at the United Nations General Assembly. 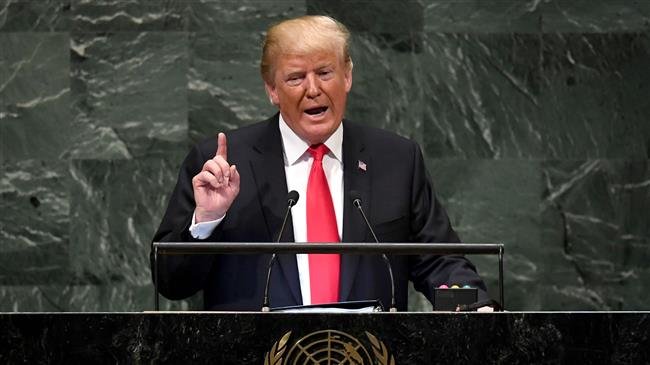 TEHRAN, Young Journalists Club (YJC) - "They weren't laughing at me, they were laughing with me," Trump told reporters in a news conference Wednesday.

The Republican head of state took the stage at the UN on Tuesday to give a much-anticipated speech about important world issues.

However, what was considered to be one of the most fateful addresses of this year’s UNGA turned into a parody of itself when Trump began bragging about his achievements since entering the White House in January 2017.

A few of the world leaders present at the session chuckled when the US president said his administration "has accomplished more than almost any administration in the history of our country" in less than two years.

“So true!” he responded. That caused the audience to explode in laughter, forcing Trump to stop for a few seconds.

“Didn’t expect that reaction but that’s OK,” he hit back at the crowd.

Trump said during the press conference that the reaction from the diplomats was taken out of context and received unfair coverage in the media.

"I said our country is now stronger than ever before, it's true," the president said. "And I heard a little rustle and I said it's true and I heard smiles."

Earlier, US Ambassador to the UN Nikki Haley also tried to contain the damage, saying the world leaders laughed during Trump’s address because they love "how honest he is."

"They love that he’s honest with them and they’ve never seen anything like it, so there’s respect there," she said. "I saw that the media was trying to make it something disrespectful. That’s not what it was. They love to be with him."