TEHRAN, September 28 - Venezuelan President Nicolas Maduro said on Thursday that U.N. human rights chief Michelle Bachelet was welcome to visit any time after she urged Caracas to allow an international investigation of the humanitarian situation in the country. 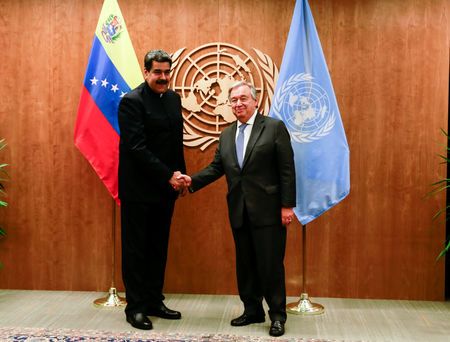 TEHRAN, Young Journalists Club (YJC) - "Of course, whenever she wants," Maduro told reporters when asked at the United Nations if he would accept a mission to report on the human rights situation in Venezuela.

"President Bachelet, the high commissioner, should coordinate with the foreign ministry when she wants to go to Venezuela. She's always welcome," he added.

Bachelet, a former president of Chile, took over at the head of the U.N. Human Rights Council on Sept. 1.

Earlier on Thursday, the council said it had approved a resolution expressing serious concern about alleged human rights violations in Venezuela, and urged the country to let Bachelet compile a report on the conditions on the ground.

In a video published by the United Nations, Bachelet said for the Human Rights Council to be able to produce an impartial report on the situation, it was vital to be allowed in.

It would also provide an opportunity for the council to get the "official version" from Venezuela's government, she added.

Venezuela, which is struggling to cope with an economic and political crisis, has come under the spotlight for its human rights record at the U.N. General Assembly this week.

Five Latin American countries and Canada on Wednesday said they had asked the International Criminal Court to investigate Maduro's government over allegations of crimes against humanity in using force to repress political opponents.

Venezuela has rejected criticism of the Maduro government as hostile propaganda and attempts to set the stage for an intervention by foreign powers in the country.