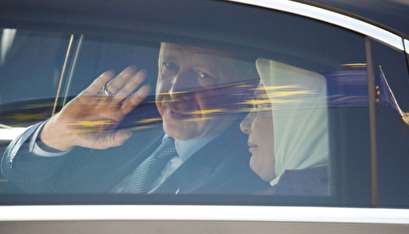 TEHRAN, Young Journalists Club (YJC) - The pair are meeting a day after Germany beat Turkey to become the Euro 2024 host nation, following a tight race that took on political significance when Erdogan fanned accusations of German discrimination in football.

In an editorial in the Frankfurter Allgemeine daily, Erdogan said he wanted to "turn the page" on a long period of tensions, sparked by Berlin's criticism of his crackdown on opponents after a failed 2016 coup.

His state visit to Germany, complete with military honors, is Erdogan's first there since becoming president in 2014 and comes as he is sparring with US President Donald Trump and the Turkish economy is in rapid decline.

But critics, including rights campaigners and German politicians, are angered by the red-carpet treatment for a leader who has built an increasingly authoritarian reputation and just 18 months ago accused Berlin of "Nazi practices".

Merkel herself has repeatedly stressed the importance of good relations with Ankara, a partner she relies on to help stem the flow of migrants to Europe.

Yet she vowed not to turn a blind eye to human rights violations during her talks with Erdogan.

"When there are differences in political systems and things to be criticized, then we express criticism -- and we will do that tomorrow," Merkel said at an event in Bavaria late Thursday.

"But that does not mean that I do not want a stable Turkey."

The hostility towards the visit comes at an awkward time for the veteran chancellor, who can ill afford any missteps after being weakened by a slew of crises that have rocked her fragile coalition.

Merkel last week was forced to backtrack on a decision to promote a domestic spy chief who was under fire for his alleged far-right sympathies, prompting the chancellor to admit she had misread the public mood.

Erdogan critics have vowed to take to the streets across Germany to protest everything from Turkey's record on human rights and press freedom to its offensive against Kurdish militia in Syria.

Some 10,000 people are expected to rally under the motto "Erdogan Not Welcome" in Berlin on Friday.

Demonstrators are also planning to protest in Cologne on Saturday where Erdogan will open one of Europe's largest mosques, commissioned by the disputed Turkish-controlled Ditib organisation, after a working breakfast with Merkel.