TEHRAN, September 28 -Saudi Arabia is responsible for the dire humanitarian situation in Yemen, says an activist, adding that the international community must take concrete action to stop the Saudi blockade on the impoverished Arab nation. 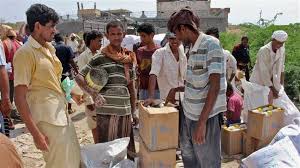 The World Food Programme (WFP) warned that Yemen is on the brink of a full-blown famine, where 18 million of its 29 million population is suffering from food insecurity.

“Actually all what is happening in Yemen, mainly and the only reason is because of the Saudi-led coalition blockade on Yemen and it is really strange for the World Food Programme not to mention or point out who is responsible for this, as they call it the worst humanitarian crisis and they have warned of a full famine in Yemen,” Hussein al-Bukhaiti told Press TV in an interview on Friday.