Erdogan accuses US of breaking promises on Syria’s Manbij

TEHRAN, September 28 - Turkey's President Recep Tayyip Erdogan has censured the United States over its non-compliance with a deal reached in June on the withdrawal of Washington-backed Kurdish militants from Syria’s northern city of Manbij. 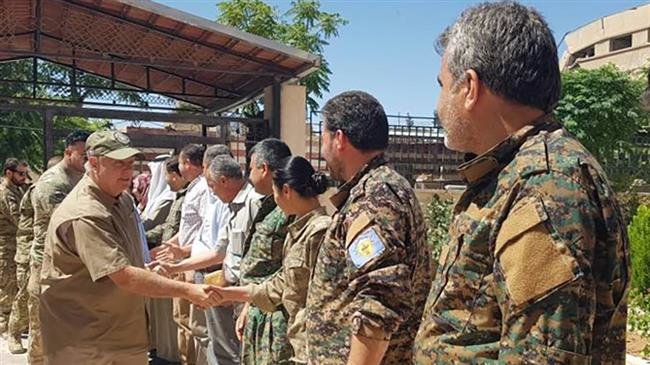 TEHRAN, Young Journalists Club (YJC) - In June, Turkey and the US agreed on a plan for the withdrawal of the so-called Syrian Democratic Forces (SDF), a Kurdish-dominated and anti-Damascus militant group that has the support of Washington, from Manbij.

Ankara considers the SDF as largely composed of militants from the People's Protection Units (YPG), viewed by the Turkish government as a terror group and the Syrian branch of the outlawed Kurdistan Workers’ Party (PKK). The latter has been fighting for an autonomous region inside Turkey since 1984.

According to the deal, the Turkish and American troops are now carrying out patrols in Manbij to clear the area of the militants.

However, the Hurriyet newspaper on Friday quoted Erdogan as saying that the YPG militants remain in the city, adding that the US has not kept up with the roadmap agreed back in June.

"The United States certainly did not comply with the agreed calendar of the Manbij roadmap; YPG did not exit the area. The real owners of the region are not settled in yet," Erdogan told reporters following his recent visit to New York to attend the United Nations General Assembly.

"The United States did not keep their promise here," he added.

The June agreement ended months of tensions between the two NATO allies over Washington’s support for Kurdish militants.

The US angered Turkey by announcing a plan for the formation of a Kurdish militant force in Syria near the Turkish border, prompting Ankara in January to launch a cross-border military operation inside Syria, code-named Operation Olive Branch, with the declared aim of eliminating the YPG militants from northern Syria, particularly the Afrin region. Turkish troops captured Afrin in March, claiming that they had killed scores of YPG militants until then.

Earlier this year, Turkish President Recep Tayyip Erdogan had threatened to push its Afrin offensive against the YPG militants eastward to Manbij, where US forces are stationed, risking confrontation between the NATO allies.

However, Washington agreed to withdraw the US-backed Kurdish militia from Manbij, arguably paving the way for Turkish troops to capture the volatile town, according to the recent US-Turkey deal.

Syria has strongly denounced the presence of Turkish and US troops around Manbij. The Syrian government has given a degree of authority to the Kurdish regions to run their own affairs in the face of a foreign-backed militancy. The US, however, has used the vacuum to establish a foothold in those regions with the help of militants.