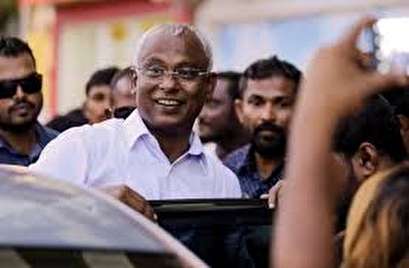 Election Chief Ahmed Shareef said the commission had received 423 complaints about the election by Thursday, of which 194 were outstanding.

“The Complaints Bureau and the Commission have decided that none of the complaints filed with the commission will affect the outcome of the election,” Shareef told reporters in the capital Male.

“We also received several phone calls in which we (the commissioners) were threatened with physical harm. We did not respond to it because the state’s security services were providing security arrangements for all the commissioners.”

The police and military have said they will uphold the result of the election.

Yameen conceded defeat on Monday, but his party later requested a delay in announcing the official result, which some in the opposition believed may have been an attempt to have the election resulted annulled.

Yameen, who will be president until Nov. 17 according to the constitution, has jailed political opponents and cracked down on dissent.

The Maldives is best known as a luxury holiday destination and is key to a battle for influence between India and China.

It has faced political upheaval since February when Yameen imposed a state of emergency to annul a Supreme Court ruling that quashed the convictions of nine opposition leaders, including former president Mohamed Nasheed, the country’s first democratically elected leader.