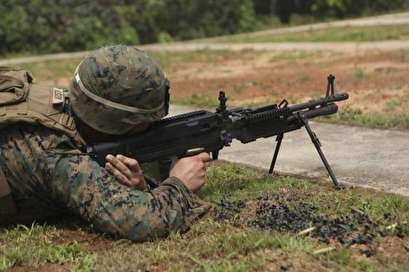 Work locations and funding will be determined by individual order with an estimated completion date of September 2023, the Pentagon said in a contract announcement on Wednesday.

The M60 is a family of general purpose 7.62mm medium machine guns designed for infantry, vehicle and aerial use. It has been in service in different variants since 1957.

The firearm has a maximum rate of fire of 650 rounds a minute and an effective range of up to 1,200 yards. It uses disintegrating belt ammunition that comes in small 100 round boxes, or can be linked together in larger containers or bags.

Originally designed as a platoon level support weapon, the M60 has seen use as a vehicle-mounted machine gun and as a door-gunner weapon on helicopters.

The M60 has seen service in every U.S. conflict since Vietnam and has been widely exported. It is one of the most widely used machine guns worldwide in the last five decades.

It has been largely supplanted in frontline service by the M240, but continues to see use on helicopters and in some variants by special operations units like the Navy SEALS.

Forward deployed units often called it the "pig" because of its heavy weight and relatively ugly appearance.