TEHRAN, September 30 -Palestinian resistance icon Ahed Tamimi has been symbolically awarded Real Madrid’s number 9 jersey, in a move that has prompted Israel to accuse the club of “embracing terrorism.” 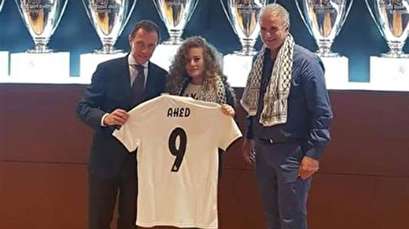 The 17-year-old is touring Europe after being released from an Israeli jail where she was held for slapping and pushing Israeli forces outside her home in the occupied West Bank late last year.

Tamimi was invited by Real and on Saturday arrived at the club where she was received by former striker and co-manager Emilio Butragenio and given the jersey which bore her name.

“What a shame, Real Madrid accepts a terrorist that incites to hatred and violence, what is the connection between this and soccer values?” Israeli Foreign Ministry spokesman Emanuel Nachshon tweeted.

“Ahed Tamimi does not fight for peace, she defends violence and terror, the institutions that have received and celebrated her indirectly encourage aggression and not the dialog and understanding that we need,” Daniel Kutner, Israel’s ambassador to Spain, wrote.

Tamimi took on the Israeli forces after they shot her cousin in the head with a rubber bullet. She was arrested last December after the video of the incident took the Internet by storm.

She was then charged with a total of 12 counts, including assault, incitement, obstructing Israeli forces, and stone-throwing.

In March, she reached a plea bargain with Israeli military prosecutors, according to which she was sentenced to eight months in prison and fined $1,500.

Tamimi was released on July 29, pledging to continue the Palestinian struggle against the Israeli occupation.