TEHRAN, October 12 - U.N. Secretary-General Antonio Guterres on Friday visited an Indonesian city shattered by an earthquake and tsunami to personally assess the impact of the disasters. 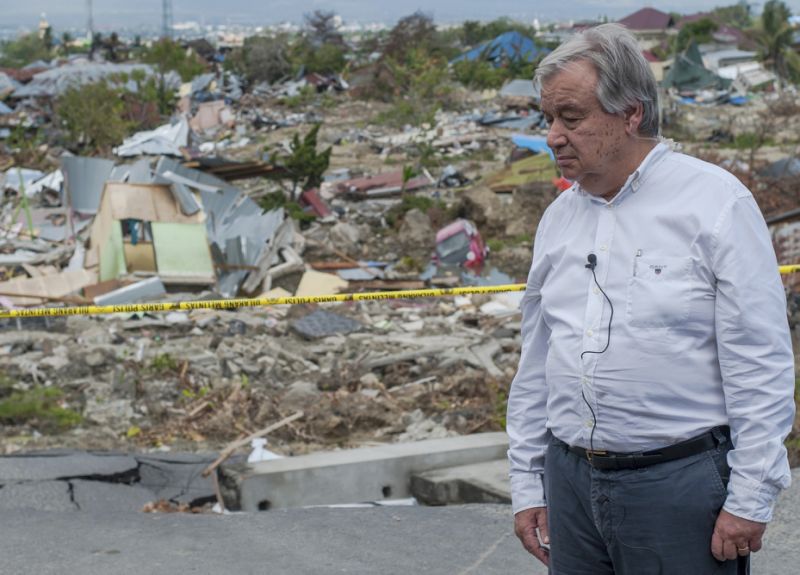 TEHRAN, Young Journalists Club (YJC) - Guterres is attending the annual meetings of the International Monetary Fund and World Bank on the island of Bali. He paid a visit to the hard-hit city of Palu on Sulawesi island, where Indonesian Vice President Jusuf Kalla welcomed him at the partly damaged airport.

They were briefed by the country's top disaster official, Willem Rampangilei, and Central Sulawesi Gov. Longki Djanggola on the damage caused by the Sept. 28 quake, which triggered a tsunami that swept away houses, crumpled cars and beached numerous ships.

Kalla and Guterres visited Balaroa, where the force of the magnitude 7.5 quake liquefied soft soil and tore apart neighborhoods, and the coastal area of Talise, which was devastated by the tsunami.

"Here in Palu, I saw first-hand the destruction caused by the recent earthquake and tsunami," Guterres said on Twitter during the visit. "To the many people I saw and spoke to: your strength and resilience are remarkable. The U.N. is with you to support government-led rescue and relief efforts."

Indonesia's disaster mitigation agency said the official death toll had risen to 2,073 as of Thursday, with most of the fatalities in Palu.

Guterres returned in the afternoon to Bali where he will meet Indonesian President Joko "Jokowi" Widodo and other officials attending the IMF-World Bank meetings, which continue through Sunday.