TEHRAN, October 15 -Five South Koreans and four Nepali guides on a Himalayan climbing expedition were flung to their deaths after a huge block of ice crashed over a cliff into a narrow mountain gorge, a helicopter rescue official said on Monday. 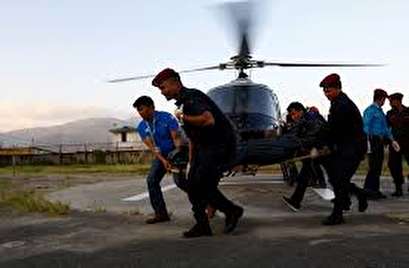 TEHRAN, Young Journalists Club (YJC) -Five South Koreans and four Nepali guides on a Himalayan climbing expedition were flung to their deaths after a huge block of ice crashed over a cliff into a narrow mountain gorge, a helicopter rescue official said on Monday.

It was Nepal’s worst such disaster since 2015, when 18 climbers were killed in an avalanche triggered by a massive earthquake at the base of Mount Everest.

The team attempting Mount Gurja, a 7,193 meter-high (23,600-foot) peak, was led by Kim Chang-ho, a veteran of the sport who had set speed records on 14 of the world’s highest mountains.

The accident appeared to have happened on Thursday or Friday, said Suraj Paudyal, a rescue official with the private helicopter company that was involved in retrieving the bodies, which were scattered over a wide area in the mountains.

“Some bodies were by the side of a cliff, while others lay in the ravine,” said Paudyal, one of the first to arrive at the site, adding that it was reached only by dropping a 100-metre (330-foot) -long line (rope) and harnesses from the helicopter.

“A massive block of ice (serac), probably 100 metres (330 ft) tall, likely fell from the mountain along a gorge, sending strong winds that hit the camp, threw the climbers off a cliff edge and into a ravine,” Paudyal told Reuters on Monday.

He did not elaborate on how he had been able to reconstruct the sequence of events.

Nepali authorities said they had no details of the incident, which happened in a remote area.

Nepal is arranging to send home the bodies of the South Koreans after post-mortems, said Surendra Thapa, a tourism ministry official.

The South Korean embassy in Kathmandu, the Nepali capital, had no comment.

Villagers had spotted the bodies on the mountain slopes on Saturday, but bad weather prevented emergency workers from retrieving them.