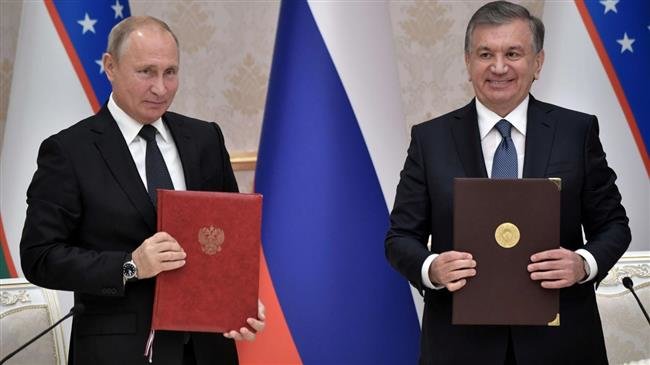 TEHRAN, Young Journalists Club (YJC) -The two heads of state pressed a symbolic button to mark the inauguration held at a conference hall in Uzbekistan’s capital city of Tashkent on Friday, effectively launching preliminary geological studies to determine the $11 billion power plant’s construction site. The anticipated power station is estimated to be fully functional in the country’s electric grid eventually in 2028.

The plant will be the first nuclear energy production site in any of the former Soviet states in Central Asia, where the controversial Soviet-era Semipalatinsk nuclear testing site in Kazakhstan's northeast and the 1986 Chernobyl nuclear plant accident in Ukraine shaped the region’s understanding of nuclear power.

Uzbek officials, however, currently describe the planned nuclear power plant as a “breakthrough” in the energy sector of their country.

Putin described the nuclear deal as "a new industry in Uzbekistan," adding that the "two reactors with a capacity of 2.4 Megawatts each will produce cheap and clean electricity for customers in Uzbekistan and Central Asian countries, which will ensure energetic stability not only for Uzbekistan but for the whole region."

The Russia president, who had arrived in Uzbekistan a day earlier for a two-day visit, also took part in discussions on various issues with his Uzbek counterpart, signing a number of agreements.

Talking of the negotiations, Putin further highlighted Tashkent’s important role in having "active participation" in talks on Afghanistan, adding that "we consider it important [for Uzbekistan to take part in peace talks in Afghanistan] to curb threats posed by that country linked to the spread of terrorism, drug trafficking, and organized crime."

Mirziyoyev pointed to the bilateral military-technical details of the talks, adding that "a detailed exchange of opinions has taken place on countering terrorism, extremism, and especially the radicalization of youth."

The last time Putin visited Uzbekistan was in 2016, when the country was facing political uncertainty following the death of long-term leader Islam Karimov.

Bilateral ties between Russia and Uzbekistan hit a record low in 2012 after Tashkent walked out of the Collective Security Treaty Organization (CSTO), a Moscow-led military bloc that now consists of six ex-Soviet members.

Relations between the two countries picked up toward the end of Karimov’s reign, and have been lifted to a new level after Mirziyoyev's ascent to power.

Uzbekistan is a landlocked country, with Kazakhstan to its north, Tajikistan to the southeast, Kyrgyzstan to the northeast, Afghanistan to the south and Turkmenistan to the southwest. With a population of 30.5 million, it is Central Asia's most populous country. The Uzbek economy relies mainly on production of cotton, gold, uranium, and natural gas.