TEHRAN, October 20 -Syrians in the occupied Golan Heights have demonstrated and burned Israeli election ballots in a symbolic dismissal of local council elections and “a policy of judaization” administered by the Zionist regime. 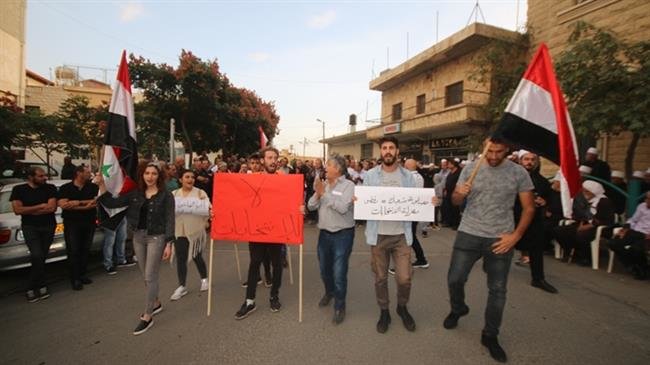 TEHRAN, Young Journalists Club (YJC) -The demonstrators, who described the elections as an Israeli effort to legitimize its occupation, raised Syrian flags on Friday while gathering in a central town square in Majdal Shams, the most populated of four Syrian communities in Golan, and vowed to spread demonstrations to the other communities in ongoing protests until the end of this month.

Political activist and former prisoner Bashar al-Maqt addressed the crowd, asserting that the election along with any other Israeli measure is legally void due to the illegal occupation. Maqt further called for international organizations to put an end to the racist judaization policy maintained by Tel Aviv.

Other protesters chanted in support for the integrity of the Syrian state, rejecting any compromise of their national identity.

"The Golan will remain Syrian and Arab land in the face of the occupation and its supporters," said a young protester named Emille Masoud.

Some local media outlets have brought up the symbolic significance of the burned ballots, claiming that the move is reminiscent of when Syrians in the occupied land burned Israeli identification cards handed out by occupation forces in 1982.

The protests come two weeks after Golan's Druze community organized a similar act of defiance against Israeli authority, waiving large Syrian flags and portraits of Syrian President Bashar al-Assad towards Syrian soldiers on the other side of the border.

The Syrian communities in the Golan fell under Israeli occupation as a result of the 1967 Third Arab-Israeli War. The territory was officially annexed in 1981 by Tel Aviv in a move that was never recognized by the international community.