TEHRAN, November 06 - A Russian fighter jet has intercepted an American spy plane that was taking part in a NATO military exercise over the Black Sea in an effort “to prevent a violation” of Russian borders, Russia’s Defense Ministry says. 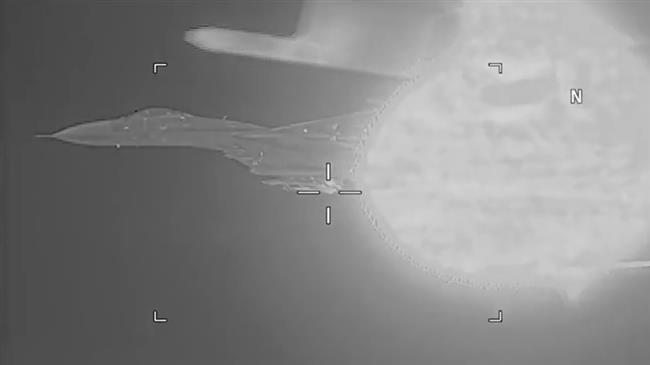 TEHRAN, Young Journalists Club (YJC) - The ministry said in a statement on Monday that a Su-27 fighter jet had intercepted a US Navy EP-3E Aries spy plane that had been approaching the Russian border.

“It [the Su-27 jet] approached the aircraft at a safe distance… and escorted it away from the airspace of the Russian Federation in compliance with all security and safety requirements,” the ministry explained.

“The fighter’s crew reported identifying the US electronic surveillance plane and escorted it to prevent a violation of Russia’s border, while following all the safety guidelines,” the statement added.

The US Navy, which has posted a video of the incident on Twitter, accused the Russian military of having conducted an “unsafe” operation.

This image grab from a US Navy video shows a Russian Su-27 fighter jet approaching the US Navy EP-3E Aries spy plane over the Black Sea on November 5, 2018.
The US Navy said that the “armed” Russian jet stayed around the EP-3 for about 25 minutes and that the US jet was “operating in accordance with international law.”

“The crew of the EP-3 reported turbulence following the first interaction [between the two aircraft], and vibrations from the second,” it added.

The American statement claimed that the maneuver “put our aircrews in danger.”

The Russian ministry said the Russian fighter jet returned to its home base after the US spy plane altered its flight course away from the border.