TEHRAN, November 11 - Five people were killed and 11 injured in a mudslide near Rio de Janeiro on Saturday, Brazilian authorities said. 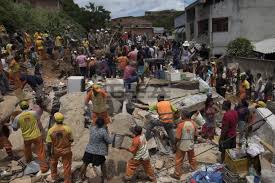 He said people were killed and injured when a large boulder rolled on top of six houses in the Boa Esperanca neighborhood.

Rescue workers were searching for victims and survivors trapped underneath the rubble and mud.