TEHRAN, November 16 - Iran has condemned a United Nations resolution that accuses it of human rights violations, stressing that the measure's sponsors are playing a "political charade." 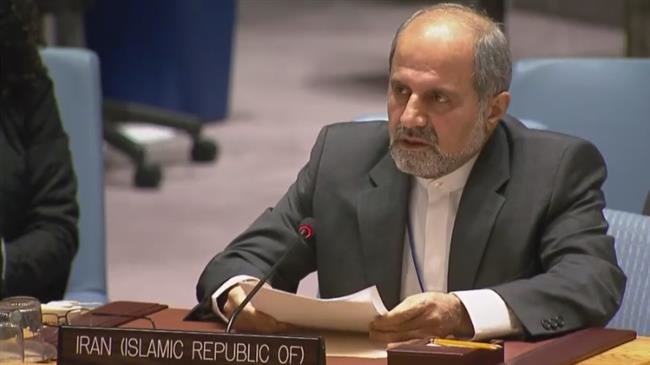 TEHRAN, Young Journalists Club (YJC) - The resolution adopted by the UN General Assembly’s Human Rights Committee was approved Thursday in a 85-30, with 68 abstentions. This means the resolution will most probably be approved by the 193-member world body when it comes up for voting next month.

Speaking ahead of voting on the Canadian draft resolution, Iran's deputy ambassador to the UN Es’haq Al-e Habib said the countries sponsoring the measure have done everything in their power to “suppress or derail” Iranian people’s “century-long struggle… for the causes of human rights and democracy.”

“Orchestrating a military coup in 1953 against a democratically-elected government, unconditionally supporting a despotic ruler for the following two and half decades, supporting a war of aggression against Iranians during the 1980s, providing chemical weapons and reconnaissance to [former Iraqi dictator] Saddam to target Iranians, shutting down an Iranian passenger flight murdering all of its 290 passengers, colluding with renowned terrorist cults, and waging a full-fledged economic war against Iranians in defiance of Security Council resolution 2231 and the mandatory ruling of the International Court of Justice are only a few examples to recall,” he said.

“In fact, not a single day has passed since 1953 in which the same forces have not harmed and tortured Iranians,” Al-e Habib added.

The Iranian diplomat then proceeded to describe as "the greatest enemies" of human rights and democracy “those who conveniently abuse them against the nations and governments they dislike.”

“Weaponizing food and medicine against civilians has no other designation but crime against humanity,” he said. “Apparently, for self-proclaimed champions of human rights to reach their political objectives even a whole nation can be murdered.“

Al-e Habib said Canada was a clear example of hijacking a democracy by “proponents of racism and of apartheid.”

“Canada insists on this futile resolution notwithstanding the fact that Israel, the last apartheid regime of the world, is one of its constant co-sponsors,” he said. “Canada, where as saying goes, simply being indigenous and female is a risk.”

The diplomat said the Iranian nation, despite being under constant economic pressure from the US and its allies, will continue to promote and protect human rights.

Admitting that there might have been “deficiencies” in its implementation of human rights, the Iranian envoy said the country is "determined to address them."

"However, it is not for those who traditionally, historically and practically supported colonialism, slavery, racism and apartheid to lecture Iranians on human rights," he added.

Al-e Habib then accused the sponsors of the resolution of running a “political charade” by threatening smaller countries to withdraw aides in order to reap votes.

“Please remember that unlike those few who have historically abused human rights as instruments in their foreign policy toolbox, Iran continues to earnestly believe in dialogue based on mutual understanding, cooperation and respect,” he concluded.