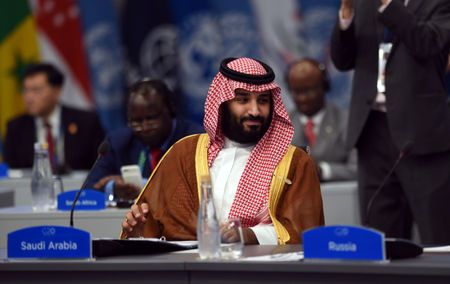 Before the summit, the heir to the throne of the world's top oil exporter had visited the United Arab Emirates, Bahrain, Egypt and Tunisia.

On his way to Algeria he had stopped over in Mauritania, where Saudi Arabia pledged to build a large hospital in the capital Nouakchott, state media said.

The crown prince is on his first trip abroad since the killing of Saudi journalist Jamal Khashoggi in the Saudi consulate in Istanbul, which has strained Saudi Arabia's ties with the West and battered the prince's image abroad.

Saudi Arabia has said the prince had no prior knowledge of the murder. After offering numerous contradictory explanations, Riyadh said last month that Khashoggi had been killed and his body dismembered when negotiations to persuade him to return to Saudi Arabia failed.

Algerian-Saudi investments and trade relations, especially in the oil and petrochemical sectors, will be discussed during the two-day visit, APS said on Saturday.