Kushner advised MbS on how to survive in power after Khashoggi murder: NYT 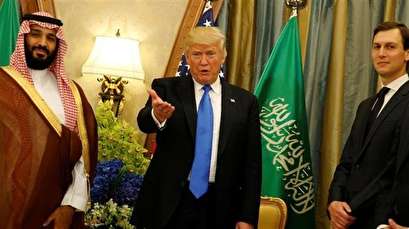 Kushner maintained his support for MbS and their personal bond continued despite revelations that Khashoggi was killed and dismembered inside Riyadh’s Istanbul consulate in early October on the orders of the heir to the Saudi throne.

Kushner even offered the Saudi crown prince advice about how to weather the storm caused by Khashoggi's assassination, urging him to resolve his conflicts in the region and avoid further embarrassments.

"Mr. Kushner’s support for Prince Mohammed in the moment of crisis is a striking demonstration of a singular bond that has helped draw President Trump into an embrace of Saudi Arabia as one of his most important international allies," the report said.

According to The New York Times, the two men call each other by their first names in text messages and phone calls.

Reviewing documents, emails and messages, the report said bin Salman and his advisers had cultivated the relationship with Kushner for more than two years in a bid to enlist American support for the Saudi prince's hawkish regional policies and consolidation of power.

Before Trump's inauguration, the Saudis were trying to position themselves as essential allies who could help his administration honor its campaign pledges, the report said.

The Saudis, it added, offered help to resolve the Israeli-Palestinian conflict as well as hundreds of billions of dollars in deals to buy American weapons and invest in American infrastructure.

"A delegation of Saudis close to the prince visited the United States as early as the month Mr. Trump was elected, the documents show, and brought back a report identifying Mr. Kushner as a crucial focal point in the courtship of the new administration," the report noted.

“The inner circle is predominantly deal makers who lack familiarity with political customs and deep institutions, and they support Jared Kushner," the delegation observed.

Martin Indyk, a fellow at the Council on Foreign Relations and an ex-Middle East envoy, said the relationship between Kushner and MbS constitutes the foundation of the Trump policy not just toward Saudi Arabia but toward the region.

Washington’s reliance on the Saudis in the so-called Middle East peace process and its backing for the deadly Saudi war on Yemen have all grown out of “that bromance" between Kushner and bin Salman, he said.

Trump has avoided rebuking Saudi Arabia over Khashoggi's murder and vowed to stand with its ally, citing lucrative arms deals among the reasons for his support.