TEHRAN, December 17 -Sudanese President Omar al-Bashir arrived in Syria’s capital of Damascus on Sunday in the first such visit by an Arab leader since the start of the Syrian conflict in 2011. 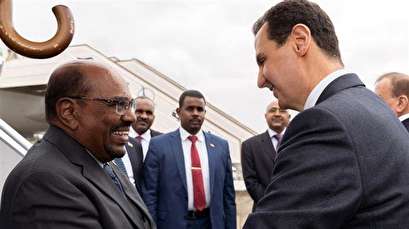 TEHRAN, Young Journalists Club (YJC) -Sudanese President Omar al-Bashir arrived in Syria’s capital of Damascus on Sunday in the first such visit by an Arab leader since the start of the Syrian conflict in 2011.

Bashir was officially welcomed at the airport by his Syrian counterpart Bashar al-Assad, official photos showed.

The two leaders discussed the "situations and crises faced by many Arab countries", according to the Syrian presidency.

Assad and Bashir also stressed the need to build “new principles for inter-Arab relations based on the respect of the sovereignty of countries and non-interference in internal affairs.”

The Syrian president was quoted as saying his country would remain committed to its “Arab identity” despite the conflict in which some Arab countries, led by Saudi Arabia, fueled it by arming militants seeking to overthrow the government of Assad.

He also said some Arab countries’ dependence on the West will not bring any benefits to their peoples; therefore it is best to adhere to Arabism and to the causes of the Arab nation.

President al-Bashir, for his part, said that weakening Syria means weakening Arab causes, and what happened in it during the past years cannot be separated from this reality.

He expressed hope that Syria will recover its vitality and role in the region as soon as possible, and that its people will be able to decide the country’s future themselves without any foreign interference, the official Syrian news agency SANA reported.

A Sudanese official late Sunday said that Bashir had returned to Khartoum "from an important visit" to the Syrian capital.

The Sudanese president last visited the Syrian capital in 2008 for the Arab League summit which was held there that year.

Under the influence of Persian Gulf monarchies, the Arab League suspended Syria's membership at the end of 2011.

Although many Arab countries have closed their embassies or downgraded their ties with Damascus, there have been growing calls in the Arab world in recent months to normalize ties with Syria and give it back its seat in the Arab League.

The Arab Parliament recently called on the Arab League to end its suspension of Syria’s membership at the 22-member pan-Arab body.

“The decision to suspend the Syrian seat in the Arab League was, in my opinion, a very hasty decision,” Arab League Secretary General Ahmed Aboul Gheit said in April.

Earlier this week, head of the Russian National Defense Management Center Colonel General Mikhail Mizintsev said Syria should rejoin the Arab League in order to help support the process of a political solution to the ongoing crisis.

In November, Russian daily Nezavisimaya Gazeta reported that the UAE was negotiating the reopening of its embassy in Syria and return of its envoy to Damascus.

A source in Damascus said Emirati officials had been meeting with the Syrian government over the issue.

An Emirati diplomat, the source said, was based permanently in Damascus, while other officials made regular visits to the Syrian capital.

Turkish Foreign Minister Mevlut Cavusoglu said Sunday the Ankara government would consider working with Assad if he won a democratic and credible election.

Government forces and their allies now control most parts of Syria while anti-Damascus militants occupy just small pockets of territory on the country's fringes.

Idlib and its surroundings are now the only significant area still held by Takfiri elements, with the US and its European allies sabotaging the Syrian army's plan to liberate it.