TEHRAN, December 19 - More than 100 rucksacks filled with warm clothing, food and toiletries have been distributed to the homeless in Preston. 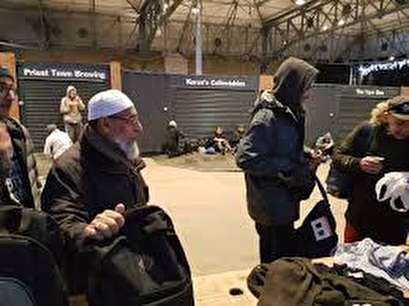 TEHRAN, Young Journalists Club (YJC) - The rucksacks were put together after a charity collection by the Preston Help the Homeless scheme at Jamea Mosque in Clarendon Street, Avenham.

Preston Help the Homeless was set up by a group of friends in November 2018 to provide practical support to the rough sleepers community.

Shenaz, chairman of Preston Help the Homeless, said: “There’s a huge number of people sleeping rough on the city’s streets and with the weather getting worse these people are in real difficulties, something that has really touched many of us. "As a result, we got together and launched ‘Preston Help the Homeless,’ a community group that wants to do something practical to support and help people who sleep rough in Preston. “The rucksack distribution is our first campaign and since we let the message out about what we’re doing, we’ve had an overwhelming response from the community, with people from as far as Yorkshire and even London reaching out to donate. "We’ve collected 105 rucksacks that have been filled with basic data-x-items that people sleeping rough could do with- such as warm clothing, hygiene products and non-perishable food.”

Members of Preston Help the Homeless, along with the managing committee at the Jamea Mosque, distributed the rucksacks to people sleeping rough.

Preston Help the Homeless are also gearing up for another campaign in the New Year which involves raising funds to purchase and distribute sleeping bags that are suitable for the harsh winter weather.

Earlier this year, the Jamea Mosque coordinated a Lancashire-wide fund-raising campaign which involved mosques from across Lancashire raising ,ore than £30,000 towards a digital CT scanner at Royal Preston Hospital.