Former minister: Imam Khomeini not for permanent cut-off with US

Tehran, YJC. Rafiqdoust says the ultimate option for Iran and the US is to resolve disagreements. 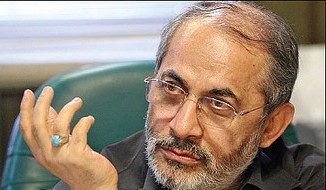 "I believe that Iran and the US have no way but to resolve their disagreements. Negotiations cannot be skipped,” asserted Mohsen Rafiqdoust, former Guardian Corps Minister.

Speaking in a political meeting in Tehran on Saturday, Rafiqdoust said "When I was made the Minister of Defense I visited Imam Khomeini. There was no ministry headquarters and the spy den [US Embassy]was also taken by the Revolutionary Corps. I asked Ahmad Aqa [Khomeini’s son] if he would let us launch the ministry on the spy den premises. But he said ‘Go tell Imam.’ When I told him, Imam said ‘Why there? There belongs to the US. I do not think we are going continue being cut off the US for a thousand years.’”

Pointing to his activities during the Iran-Iraq war, he said "Right then we decided to find out the way to make nuclear bombs. I asked Imam about his opinion. He said ‘Don’t go after atoms.’ We wrapped it up right then. The Master [ayatollah Khamenei] also said it is haram. Really we don’t need it. Maybe we are not self-sufficient in many things and we help the government to provide for people’s supply. But we are self-sufficient in the field of defense. In the case of the drones we tested some models which Americans lack.”

Providing comments on the Geneva talks on Iran’s nuclear program, Rafiqdoust stated "As the 11th administration entered office, people’s disillusionment grew into hope. If, inshallah, doors are opened the country will thrive. I am against no-talks, no matter with whom. One does not hold grudges against the world. At the time of Imam I said a number of things, one being that we are at war with the US, but we must finally sit and talk to each other. So I was against no-talks.”

"The outcome of the negotiations, whatever it may be, will be to the benefit of Iran, even if sanctions are not reduced. What we really gave we did not want. Imam said we do not need a-bombs, the Master renounced it as haram. During the war, Iraq applied chemical weapons. Imam would not even allow us make chemical arms. We went and made them but he prevented it. So the more we go into them, the more the talks are to our benefit.”