At least six people have been killed in eastern Sudan cities amid mounting protests over the rising price of bread. 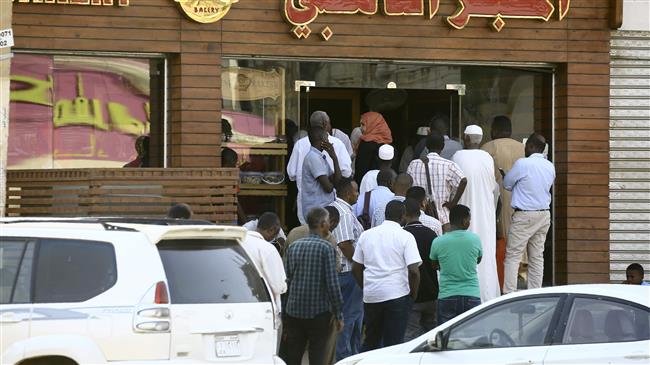 A student and another demonstrator were among at least six people killed during violent protests in cities in eastern Sudan on Thursday.

Police fired tear gas at around 500 people in the capital Khartoum, some of them chanting, "The people want the fall of the regime."

In northern city of Dongola, protesters set fire to the local offices of President Omar al-Bashir's ruling National Congress Party, witnesses
said, while in the northeast, protesters hiding their faces behind scarves came out for a second day in Atbara, chanting "freedom," and setting car tires alight.

A government decision to raise the price of bread this week from one Sudanese pound to three (from about two to six US cents) sparked protests across the country on Wednesday.

Demonstrators in al-Qadarif "threw stones at banks [in the city center] and smashed cars," resident Tayeb Omar Bashir told the agency by phone, adding that they then "moved to the ruling party headquarters near the market it torched it completely."

Protests in Dongola, 500 kilometers north of Khartoum, "started with university students who were joined by others when they reached the city center," an eyewitness told AFP by phone. "

They attacked the headquarters of the NCP and set it ablaze," the witness said.

In the city of Atbara, around 400 kilometers (248 miles) east of Khartoum, the police fired tear gas to disperse protesters just hours after authorities imposed a curfew on the city because demonstrators had torched its NCP headquarters.

"Some 1,500 demonstrators tried to enter the city of Atbara from [a suburb], calling for the fall of the regime," an eyewitness said. "Riot police intercepted them and fired tear gas at them," the witness added.

Hours later, a state of emergency was declared in the eastern Sudanese city of al-Qadarif, an official speaking on condition of anonymity was quoted by Reuters. A curfew was also imposed from 6:00 p.m. to 6:00 a.m. local time, the city's commissioner said.

A state of emergency and curfew were also declared in the northeastern city of Atbara after protests there.

The bread shortage has hit Sudan's cities for the past three weeks, including the capital. In the past year, the cost of some commodities has more than doubled in Sudan, where inflation is running at close to 70 percent and the pound has plunged in value.

Sporadic protests broke out in January this year over the rising cost of food, but they were soon brought under control with the arrest of opposition leaders and activists.

Sudan had significant oil reserves until South Sudan gained independence in 2011, and the north-south split saw the country lose three quarters of its reserves.