Nine forest vital signs reveal the impacts of the climate 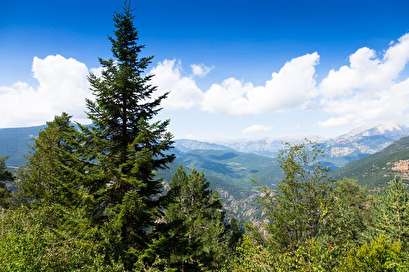 Researchers looked at databases of forest characteristics, as well as records of climate change. By comparing datasets, scientists were able to isolate links between measurable traits and large-scale changes.

"One of the challenges is that you need a lot of data to accurately measure functional diversity," researcher Daniel J. Wieczynski said in a news release. "So our idea was to take what functional data we have available from databases and pair this with locally collected field data, as well as data about species abundance, to say something about climate-biodiversity relationships that we couldn't say before."

The analysis allowed scientists to identify the forest traits most impacted by climate change. The data showed leaf area is most directly impacted by changes in vapor pressure and temperature. Meanwhile, height is dictated by temperature fluctuation.

Not surprisingly, the research -- published in the journal Proceedings of the National Academy of Sciences -- showed forest and tree traits are changing in response to global warming.

"By calculating a more accurate relationship between functional diversity and climate, using the methods we used, we'll be able to more accurately predict those changes in the future using these models," Wieczynski said. "And hopefully this will show it's important to measure more trait data in communities, or more individual level information in communities than just species-level information."