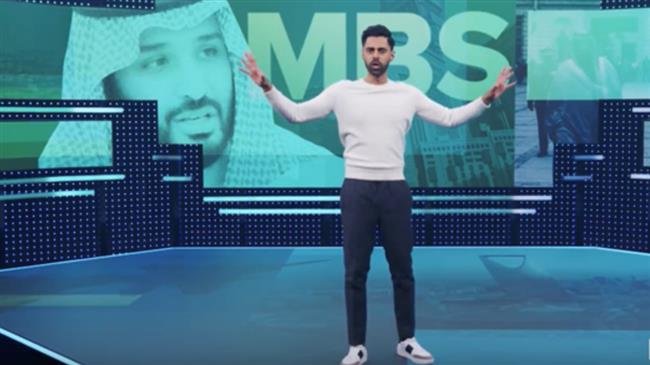 TEHRAN, Young Journalists Club (YJC) - The Riyadh regime took issue with an episode of Hassan Minhaj's "Patriot Act," where the American comedian criticized bin Salman over the killing of dissident journalist Jamal Khashoggi in October and the Saudi-led coalition's deadly war against Yemen.

In the program, which was aired on October 28, Minhaj said the Saudi crown prince was being hailed as the reformer that the Arab world had long wished for right until Riyadh admitted to killing Khashoggi inside the Saudi consulate in the Turkish city of Istanbul.

“But the revelations about Khashoggi’s killing have shattered that image and it blows my mind that it took the killing of a Washington Post journalist for everyone to go: ‘Oh I guess he’s not really a reformer,’” Minhaj said.

Khashoggi, a Washington post columnist, was a friend of the crown prince but fall out of favor with him after criticizing for adopting policies that were not radical enough.

He was killed and dismembered by Saudi agents after entering the Saudi mission on October 2.

The US Senate, the CIA and Turkish intelligence agencies have all tied the crown prince to the grisly killing, despite Riyadh's insistence that he had no knowledge of the operation.

In his roughly 18-minute monologue during the show, Minhaj also takes shots at the oil-rich kingdom's ruling Al Saud family and their vast wealth.

“Saudi Arabia is crazy. One giant family controls everything,” he says.

Minhaj also mentions the Saudi war on Yemen, which has killed thousands of civilians and pushed millions to the brink of famine since its onset in March 2015.

He took the opportunity to promote a fundraising for Yemeni people in need.

Netflix took the episode down in Saudi Arabia after Riyadh argued that its content violated cyber-crime laws in the kingdom, according to the Financial Times.

Rights group Amnesty International blasted Saudi Arabia’s censorship of Netflix, calling it “further proof of a relentless crackdown on freedom of expression” by the regime.

“By bowing to the Saudi Arabian authorities’ demands, Netflix is in danger of facilitating the kingdom’s zero-tolerance policy on freedom of expression and assisting the authorities in denying people’s right to freely access information,” said Samah Hadid at Amnesty International.

Saudi prosecutors are accused of using the broadly worded cyber crime law to detain rights activists, scholars and virtually anybody who expresses critical views about the government or its policies on social media.

The crackdown has been intensified since Prince Mohammed was named heir to the throne in mid-2017.