Europe will not allow US to determine trade relations with Iran: Mogherini 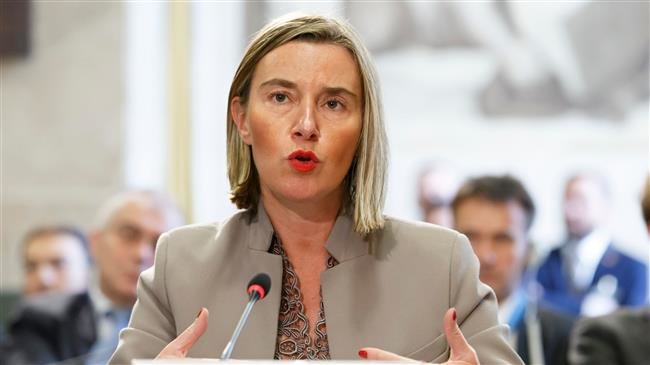 TEHRAN, Young Journalists Club (YJC) - "We Europeans cannot accept that a foreign power – even our closest friend and ally – makes decisions over our legitimate trade with another country," Mogherini said in an interview with the European Council on Foreign Relations published on Friday.

She added that the EU is working with the rest of the international community to keep alive the landmark nuclear agreement, officially known as the Joint Comprehensive Plan of Action (JCPOA), despite the US unilateral move to pull out from the deal.

The Iran nuclear deal "has so far been implemented in full, as certified by the International Atomic Energy Agency in 13 consecutive reports," she said.

US President Donald Trump withdrew his country in May from the historic Iran nuclear deal and decided to re-impose unilateral sanctions against Tehran.

Under the deal, reached between Iran and six major powers - the United States, Britain, France, Germany, Russia and China - Tehran agreed to put limits on its nuclear program in exchange for the removal of nuclear-related sanctions.

The US administration hoped to get the other parties to the deal with Iran to likewise scrap the deal, but instead, they stressed that not only would they stick to the agreement, but they would also work to sustain it in the face of increased US pressure.

A report by the International Atomic Energy Agency (IAEA) said in November that Iran has continued to implement all its commitments under the 2015 nuclear deal even as the United States re-imposed fresh sanctions against Tehran.

The IAEA's report said Iran has been complying with the restrictions to its nuclear program laid down in the nuclear deal, adding, "There is nothing that indicates that Iranian cooperation or the Iranian attitude has changed since the 5th of November."

Mogherini further rejected claims that Europe is motivated mainly by economic or trade considerations and said all efforts by the EU to preserve the JCPOA have been made "because of our collective security."

"That is not the case: we do this to prevent a nuclear non-proliferation agreement that is working from being dismantled, and to prevent a major security crisis in the Middle East," the senior EU official pointed out.

She emphasized that the EU should guarantee that firms seeking to do legitimate business with Iran are allowed to do so.

"This is what we are working on right now: tools that will assist, protect, and reassure economic actors pursuing legitimate business with Iran. It is true that this situation has triggered a conversation on European economic sovereignty," Mogherini said.

Iran and the 28-nation European Union have been discussing various ways to continue doing business with Iran and bypass US sanctions.

On September 24, Iran and its five partners released a joint statement announcing the setting up of a Special Purpose Vehicle (SPV) to facilitate continued trade with Iran, bypass the US financial system, and avoid any impact of America's secondary sanctions.

Late last month, Iranian Foreign Minister Mohammad Javad Zarif said Tehran will not stand by for Europeans to fulfill their commitments under the multilateral nuclear agreement, following the United States' move to pull out from the deal.

"The Europeans are acting slowly in the fulfillment of their commitments under the nuclear agreement," Zarif said, adding, "We will not wait around for them unless they adopt practical steps."

Zarif's remarks came after Head of the Atomic Energy Organization of Iran Ali Akbar Salehi warned that Tehran's patience is running out over the failure of the European Union's economic pledges to deliver any "tangible results."

He said the EU's efforts were encouraging but added: "We have not yet seen any tangible results. So, they [Europeans] are promising us that they are doing their best to be able to translate all that they have said in political terms and to turn it into realization, in other words, to materialize what they have said."