TEHRAN, Jan 12 - The “yellow vest” protests are gaining momentum in France due to the fact that French authorities are not responding to the people’s “legitimate” demands, says an analyst. 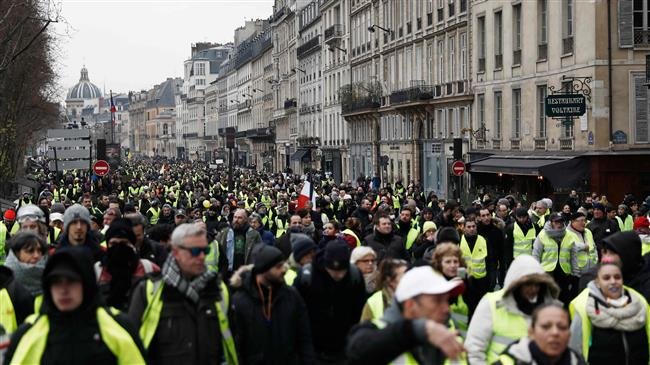 TEHRAN, Young Journalists Club (YJC) - “In order to analyze the situation in France, I have to tell you that despite the economic policies taken by the French politicians and the French government, we see some people that are on the streets. I have to tell you that it is the issue of politics and the fact that the government is not doing much, the government is passive as far as the protests are concerned,” Ahmad Nokhostine, from Press TV French, said in an interview on Saturday.

“The French people are protesting because they want better living conditions but they are not getting any response from government officials and from the authorities … Prime Minister Edouard Philippe and the judiciary are not taking the right stance against the protesters … And as you can see instead of trying to be having a more of a political stance, they are instead trying to have a harsh security stance and they are not taking into account the demands of the yellow vests,” he added.

The analyst further noted the protesters are against French President Emmanuel Macron’s economic policies which have caused a lot of problems in the country. Nokhostine said the president is “in a very difficult position.”

“As far as domestic politics are concerned, he [Macron] is caught in an impasse because his economic policies have caused a lot of problems and it is now very difficult for him to satisfy the people,” he said.

Nokhostine further stressed that the “yellow vest” movement is “legitimate”, adding that it has the support of the French people.

“It is quite obvious that this is a very legitimate movement and it has the backing of the people. This is actually the French nation that is making certain demands and what they are asking for is also completely legitimate,” he stated.

The “yellow vest” movement initially erupted in November amid public outrage over a planned hike in fuel prices. The embattled French president later backed down and suspended the hike, but the protests did not stop and turned into a broader campaign against high costs of living blamed on Macron’s economic policies.

Many of the protesters are demanding the resignation of Macron, a demand dismissed as undemocratic by the government.

The “yellow vest” campaign is said to be the biggest political crisis of Macron’s 20-month presidency and has brought his popularity ratings to an all-time low.

In recent weeks, some of the protests have turned into major riots described as the most violent clashes in France in decades.

Since the onset of the movement, 10 people have been killed and more than 1,500 have been injured. Fifty of the injury cases were serious. Thousands more have been arrested by security forces.