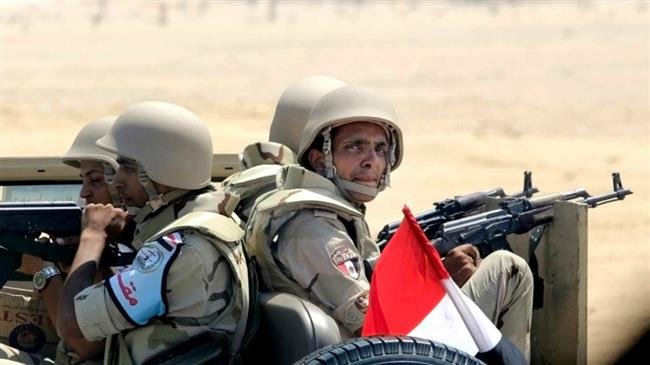 TEHRAN, Young Journalists Club (YJC) -The deadly clashes occurred in early hours of Saturday after security police forces raided a militant hideout in an area on the edge of the southern province of Sohag, some 460 kilometers south of the capital Cairo, said a statement released by the Ministry of Interior of Egypt.

It added that “six terrorist elements” had been killed in exchange of fire between the two sides around and inside the hideout, located in a gorge in one of the mountainous areas along the western Assiut-Sohag desert highway.

The ministry further said that “terrorists” were found in possession of ammunition, weapons, and an improvised explosive device.

It added that the Saturday raid was a “a continuation of the ministry’s efforts in confronting terrorist organizations which aim to undermine peace and security and chasing elements which aim to execute hostile operations in the country.”

Over the past few years, terrorists have been carrying out anti-government activities and fatal attacks, taking advantage of the turmoil in Egypt that erupted after the country’s first democratically-elected president, Mohamed Morsi, was ousted in a military coup in July 2013.

The ministry did not mention the name of the terror group, whose hideout was raided on Saturday, but the Velayat Sinai terror outfit, which pledged allegiance to the Takfiri Daesh terror group in 2014, has claimed responsibility for most of the assaults across Egypt, particularly those in the Sinai region, where the group is based.

The terror group, previously known as Ansar Beit al-Maqdis, has mainly attacked security forces in the restive region of Sinai Peninsula since its inception in 2013. The terrorists have so far killed hundreds of members of security forces.

Earlier this month, a bomb blast claimed the life of a police officer and inflicted wounds on two others outside a church in Nasr City on the edge of Cairo. The deadly explosion took place when security personnel were trying to defuse an explosive device.