TEHRAN, Jan 13 - Hamas has revealed details about a botched Israeli raid on the besieged Gaza Strip two months ago, saying it was aimed at planting surveillance devices on the resistance movement's landline communication network. 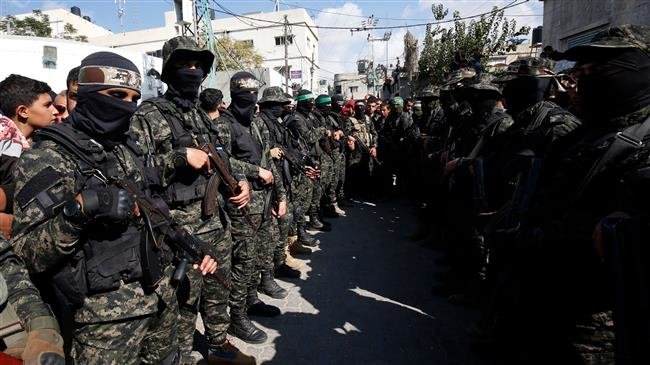 Hamas' military wing, Ezzedine al-Qassam Brigades, shared on Saturday video footage of Israeli commandos in action inside Gaza and several photos of the equipment left behind by them.

The failed raid on November 11, 2018 sparked the heaviest fighting in Gaza since the 2014 Israeli war on the coastal sliver of land, during which the Palestinian resistance fired over 400 retaliatory rockets into the occupied territories. An Egyptian-brokered ceasefire ended tensions on November 13.

Speaking at a press conference in Gaza, Qassam spokesman Abu Obeida said a 15-member elite Israeli military unit had infiltrated into Gaza under the cover of fog and traveled there using cars disguised as vehicles belonging to a local charity.

The Israeli forces used fake Gazan IDs and forged documents of humanitarian workers and had undergone training for the operation from January to October 2018, he added.

Their goal, Obeida noted, was "establishing a spy system to eavesdrop on the communications network of the resistance in the Gaza Strip."

Hamas fighters, he said, managed to stop the Israeli operatives in a civilian car at a checkpoint near the city of Khan Yunis, prompting a deadly gunfire.

“The Qassam fighters responded with gunfire, killing the commander of the unit and wounding one of its members.”

A helicopter which had been dispatched to Gaza managed to take away the remaining Israeli agents, the Qassam spokesman added.He further promised a million dollars to any local "collaborator" who supplies Hamas with information about the Israeli raid.“The enemy and its security forces should be very worried,” he warned.
“The treasure of information we gained will give us a strategic advantage on the level of the battle of wits with the Zionist enemy.”
Reports said the Israeli military censor unit had demanded the public and media not to republish the images released by the Qassam Brigades.
The Gaza Strip has been under a crippling siege since 2007 and witnessed three wars since 2008.
It has also witnessed a fresh wave of tensions since late last March, which marked the start of “the Great March of Return” protests.
The Tel Aviv regime carries out regular attacks on the coastal enclave under the pretext of hitting positions belonging to Hamas.
Source: presstv
Share to
Related News
Hamas to Chad: Normalization with Israel ‘stab in the back’ of Palestine
Hamas slams US aid cut to Palestinians as ‘political blackmail’
Syria shoots downs 'most of Israeli missiles' fired towards Damascus: State media
Syria intercepts Israeli missiles fired toward Damascus
Israeli forces kill Palestinian woman, injure 25 in Gaza
Lebanon to lodge complaint with UNSC against Israeli 'border wall'
Tags
Israel ، Gaza ، Hamas
Your Comment