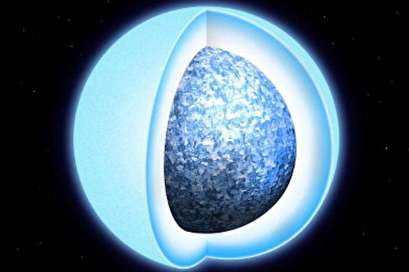 Astronomers have for the first time observed white dwarf stars solidifying into crystals.

Researchers at the University of Warwick detected stellar cores of solid oxygen and carbon, evidence of a phase change at the end of the stellar lifecycle.

The analysis revealed a "pile-up" of stars with the the same color and luminosity but with different masses and ages. The pile-up suggests white dwarfs experience a phase change when large amounts of heat dissipate from the stellar core.

"This is the first direct evidence that white dwarfs crystallize, or transition from liquid to solid," Pier-Emmanuel Tremblay, an astrophysicist at Warwick, said in a news release. "It was predicted fifty years ago that we should observe a pile-up in the number of white dwarfs at certain luminosities and colors due to crystallization and only now this has been observed."

In 10 billion years the sun will be a crystal. Models suggest there are millions of solidified white dwarfs spinning throughout the cosmos.

According to the latest research, the intense pressure inside the white dwarf's core causes electrons to become unbound, forming a conducting electron gas, which facilitates the release of energy. As temperatures cool, the white dwarf's liquid begins to solidify.

"Not only do we have evidence of heat release upon solidification, but considerably more energy release is needed to explain the observations," said Tremblay. "We believe this is due to the oxygen crystallizing first and then sinking to the core, a process similar to sedimentation on a river bed on Earth. This will push the carbon upwards, and that separation will release gravitational energy."