Qatar diplomatic crisis 'has dragged on too long'

TEHRAN, Jan 13 - U.S. Secretary of State Mike Pompeo said Sunday an ongoing boycott of Qatar by four of America's allies in the Middle East "has dragged on too long," though he gave no sign of any coming breakthrough in the dispute. 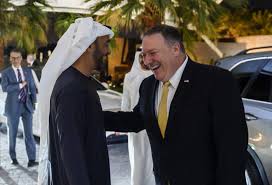 TEHRAN, Young Journalists Club (YJC) - Stopping off in the small, energy-rich nation as part of a Mideast tour, America's top diplomat made a repeated point to say that "great things" were happening between Qatar and the United States.

"We're all more powerful when we're working together," Pompeo said at a news conference. "Disputes between countries that have a shared objective are never helpful."

Pompeo said he signed a memorandum of understanding with Qatar regarding the expansion and renovation of al-Udeid Air Base, which hosts the forward headquarters of the U.S. military's Central Command and some 10,000 American troops.

However, comments by Pompeo and Qatari Foreign Minister Sheikh Mohammed bin Abdulrahman Al Thani gave no sense of any movement in the ongoing diplomatic crisis with Doha.