TEHRAN, Jan 13 -Senior Tory figures in the British parliament are ready to seize control of the country’s withdrawal from the European Union (EU) if lawmakers reject Prime Minister Theresa May's divorce deal with the bloc in an upcoming vote, a new report suggests. 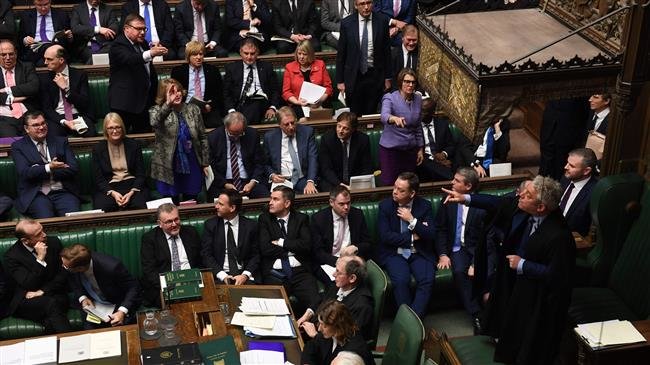 TEHRAN, Young Journalists Club (YJC) -The report in the Sunday Times said that senior lawmakers from May’s ruling Conservative Party were planning to put forward a motion in the House of Commons that would make May unable to go ahead with her plans for Britain’s departure from the EU if she loses the Tuesday vote.

It said two groups of Tory lawmakers were seeking to table the motion right after May's highly expected defeat, sources within the 10 Downing Street said.

That means lawmakers would try to change the rules governing relations between the Commons and the government to give Parliament the upper hand in the Brexit process.

One senior figure branded the potential move a “very British coup” which could upend the centuries-old relationship between executive and legislature.

According to the report, options the rebel lawmakers could use against May,  if they succeed in seizing control of Brexit from her, would include a halt to Brexit, a suspension of UK’s decision to trigger Article 50 of EU’s Lisbon Treaty, or even a new referendum that could allow Britain to remain in the EU.

London began the Brexit process by invoking the Article 50 after the first EU referendum in June 2016, when 52 percent of Britons voted in favor of the divorce.

Senior members of May’s government became angry earlier this week when Commons Speaker John Bercow allowed a debate on an amendment to a government business motion.

Based on the amendment, which pro-government lawmakers said violated old traditions of the chamber, the government was required to come up with a Plan B for Brexit within three working days of May's failure to win the upcoming vote.

May issued a fresh plea on her Brexit deal on Sunday, saying if the MPs reject the agreement, Britain would face a real catastrophe.