TEHRAN, Jan 15 - A Taliban suicide bomber killed at least four people and wounded scores when he detonated an explosive-laden vehicle late in the evening in the Afghan capital, officials said Tuesday. 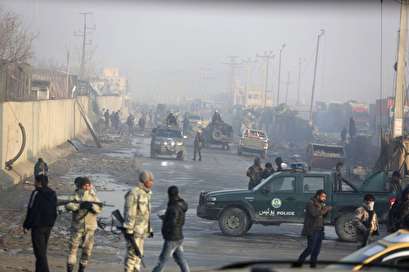 TEHRAN, Young Journalists Club (YJC) - It was the latest in a relentless wave of near daily attacks by the Taliban, who now hold sway over about half of the country and regularly target Afghan forces. The violence comes despite stepped-up efforts by the United States to find a negotiated end to the country's 17-year war.

Health Ministry spokesman Wahidullah Mayar said as many as 113 wounded were taken to different hospitals in Kabul after the Monday evening explosion near the Green Village compound, home to several international organizations and guesthouses.

Germany's Foreign Ministry condemned the bombing, in which it said a German police officer was also lightly wounded.

The area has been the frequent target of attacks in the past. Many foreigners live in the compound, which is heavily guarded by Afghan forces and also private security guards.

Roads to the area remained blocked by security forces through the night and into Tuesday morning.

Taliban spokesman Zabihullah Mujahid claimed the attack in a statement to the media, saying it involved five attackers, including the suicide bomber. The four other attackers engaged Afghan forces in a clash, he said, without elaborating on what happened to them.

One of the victims, 35-year-old pharmacists Emal Fayzi, said he was wounded by shrapnel in the chest as he was walking home in the evening. The blast was so strong, he couldn't see anything for a while. Later, he realized he was inside an ambulance.
Source: AP