Rouhani: US attempts to undermine Iran’s regional role will fail

TEHRAN, Jan 15 - President Hassan Rouhani says the United States has been seeking to push Iran aside and take the matters of this region in its own hands, but that its attempts to undermine the Islamic Republic’s regional role will certainly fail. 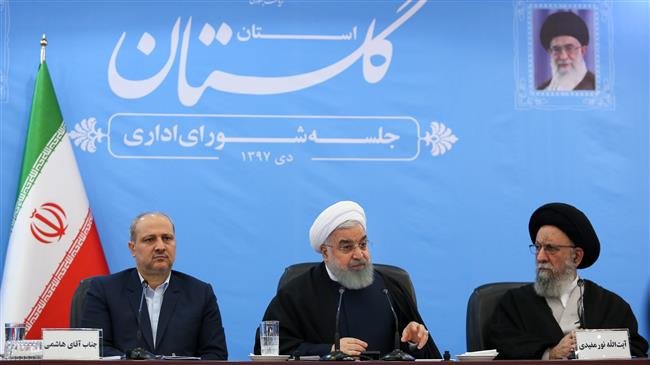 TEHRAN, Young Journalists Club (YJC) - Speaking at a meeting of the administrative council of Golestan Province on Tuesday, Rouhani said the US has been trying to prevent the Islamic Republic from acting as a “frontrunner” and an influential player in the region.

Rouhani cited the US-backed Saudi war against Yemen as an example. The Americans, he said, have spent money and used advanced military equipment to achieve their objectives there, but today they admit to their defeat and acknowledge that this conflict has no military solution.

“In Syria, they imagine that they are the absolute winner. That is also the case with Iraq.

The Americans should be held responsible for the calamity they have caused in Afghanistan, Pakistan, Yemen, Syria and elsewhere,” he said.

“The US wants Iran to leave the scene so that it can take charge of everything. This is not achievable. No matter how long the US secretary of state tours this region, it [Washington] would not be successful,” referring to Mike Pompeo’s recent visits to a number of Middle Eastern states.

Among the other American goals, he said, was detaching the Iranian people from the Islamic establishment in Iran.

The US will likewise fail in this attempt because the Iranian people will continue on the path of the Islamic Revolution, he added.

The president further highlighted Washington’s campaign of pressure and sanctions against Iran, which he said is aimed at obtaining concessions from the country in its nuclear and missile programs as well as its anti-terror role in the region.

The Islamic Republic, however, will never give up its rights, Rouhani emphasized.