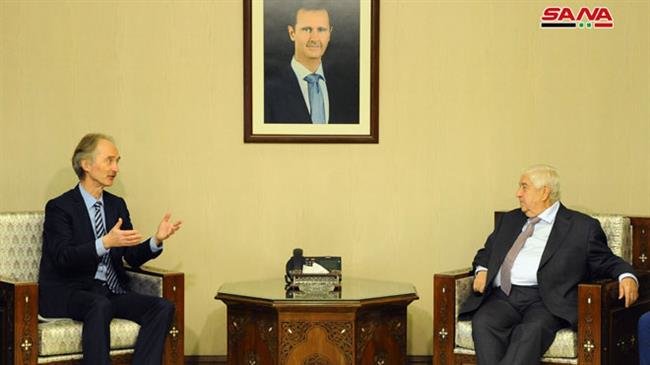 TEHRAN, Young Journalists Club (YJC) - During a meeting in the Syrian capital Damascus on Tuesday, Muallem welcomed Pedersen’s appointment as the UN chief’s new top envoy for Syria, emphasizing that the Syrian government is willing to help the veteran Norwegian diplomat succeed in his mission.

Muallem went on to say that UN-brokered Syria peace talks will benefit the war-battered nation as it will put an end to terrorism as well as the illegal presence of foreign forces on Syrian soil, and will effectively preserve Syria’s unity, sovereignty and independence.

Pederson, for his part, expressed his pleasure to visit Damascus since being appointed last October, pointing out that he plans to listen carefully to the views of the Syrian government for the success of his mission and move towards a political solution to the Syrian conflict.

He then briefed the Syrian foreign minister on the meetings and activities that he aims to undertake during his tenure in a bid to activate Syria's political process, underscoring that the process should be led by the Syrian government otherwise it will bear no fruit.

The new UN envoy for Syria also highlighted that he would make all efforts to ensure a political solution, and that he will take into account the principles enshrined in the Charter of the United Nations and relevant Security Council resolutions.

The United Nations’ new special envoy for Syria took over from Staffan de Mistura, who stepped down for family reasons after four years and four months of peace efforts that led nowhere.

Syria has been gripped by foreign-backed militancy since March 2011. The Syrian government says the Israeli regime and its Western and regional allies have been aiding Takfiri terrorist groups wreaking havoc in the country.