Avalanche kills one skier, injures another in New Mexico

TEHRAN, Jan 18 - One skier died and another was in critical condition on Thursday, hospital employees said, after being caught in an avalanche on some of the most challenging terrain at Taos Ski Valley in New Mexico, a resort known for its steep runs. 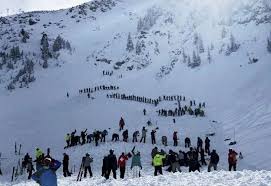 "There were no others caught in the avalanche, it was just the two," Stagg added.

The ski patrol and other skiers dug the two men out of the avalanche and they were rushed to hospital, the ski resort said on Facebook.

The first was taken to Holy Cross Hospital in Taos, where he later died of his injuries, said a hospital employee, who asked not to be identified as he was not authorized to speak to media.

The other skier was airlifted to University of New Mexico Hospital in Albuquerque and was in critical condition, said hospital spokesman Mark Rudi.

"Our thoughts and prayers are with the two individuals who were affected by today’s event and their families," Taos Ski Valley said on its social media page.

Former New Mexico governor and U.S. presidential candidate Gary Johnson was among dozens of skiers who used ten-foot poles in a 45-minute effort to search the snow before the two men were found.

"At least a hundred people were doing what I was doing," said Johnson, who lives in the Taos area, and regularly skis at the resort. "Those guys could have been any one of us."
Johnson and other rescuers spent hours after the rescue checking for another person feared to have been caught in the slide.

In each of the the last 10 winters, 27 people have died on average in avalanches in the United States, the Colorado Avalanche Information Center said.

Taos Ski Valley's ski patrol had used explosive devices in the area on Thursday morning to reduce the threat of avalanches, Stagg said.

The rocky "K3" chute the two men were skiing down is accessed off a lift to the top of the peak. The lift was opened for the first time this season on Tuesday, after more than 16 inches of snow fell in the last week.

"It's very steep and challenging terrain," added Stagg. "You like to think it's always safe, but sometimes there are pockets of snow that can avalanche."