TEHRAN, Jan 18 - Hundreds of “Yellow Vest” demonstrators have convened in the French capital, Paris, and several other cities for the tenth consecutive weekend of anti-government protests despite a national debate launched this week by President Emmanuel Macron aimed at relieving the discontent. 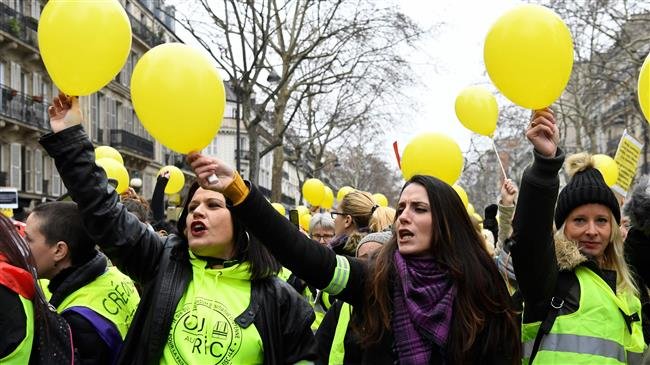 TEHRAN, Young Journalists Club (YJC) -In the capital on Saturday, demonstrators gathered at the Champs Elysees and the Invalides esplanade, home to Napoleon’s tomb, near the Assemblee Nationale lower house of parliament and the Eiffel Tower.

At the Invalides, demonstrators were carrying a banner that read, “Citizens in danger.” They marched at the front line of the rally and held coffin-shaped blackboards in memory of those who lost their lives in previous demonstrations.

Reports said the government had deployed 5,000 police forces around the capital, particularly near government buildings and the Champs-Elysees, the stage of recent violence. Some 80,000 police also fanned out across the country.

The rallies on Saturday were organized primarily to pay homage to the 10 people killed in protest-related traffic accidents and hundreds of others who have been injured since the movement began on November 17 and quickly morphed into a wholesale revolt against economic woes and Macron himself.

Since then, thousands of demonstrators wearing yellow vests have been gathering in major French cities to protest Macron’s controversial fuel tax hike, which he later dropped, and the high cost of living in France.

Protesters have criticized police forces for their use of rubber projectiles that have left dozens of people injured.

Analysts believe that the tax and salary concessions that Macron offered to the protesters in December have brought relative calm.

But according to numerous polls conducted after Macron canceled his planned fuel-tax hike on December 10, about half of the public believes his concessions were not meaningful enough and that the movement should continue.

The French president is currently facing an array of demands ranging from the re-introduction of France’s wealth tax, called the ISF, on the richest people in the country, to the implementation of popular elections that allow citizens to propose new laws.

Earlier this week, Macron initiated his three-month-long debate during meetings with mayors and local officials. The debate consists of a number of meetings organized by ordinary citizens, associations and elected officials to empower the French to voice their views regarding economy and democracy.

The European country is currently on high alert due to the threat of terrorism, with the latest attack conducted on December 11, during which five people lost their lives by the bullets of a gunman at a Christmas market in Strasbourg.

Since the onset of the movement, more than 1,500 people have been injured. Fifty of the injury cases were serious. Thousands more have been arrested by security forces.